Inside the Robe: A Judge's Candid Tale of Criminal Justice in America (Paperback) 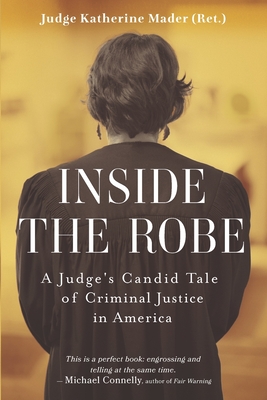 By Katherine Mader
$14.99
Unavailable, Out of Stock, or Out of Print

"This is a perfect book: engrossingly entertaining and telling at the same time. You think you know how the courts and the justice system works? Take a walk through the halls of justice with Judge Mader and you will see the unvarnished truth, both good and bad. This book literally held me hostage until the very last page."-Michael Connelly, author of Fair Warning "Wow, so unique to have a former criminal court judge, from large urban county, bare it all As a long-time criminal defense lawyer, prosecutor, and felony court judge, Judge Mader's book shall surprise and inform you about the need of reforming critical aspects of the criminal justice system."-Gil Garcetti, former L.A. County District Attorney "Not often do you find an author who has worked every role in the criminal justice system at the highest level. Judge Mader has been a fearless defender, relentless prosecutor, and outspoken bench officer. More importantly for the reader of Inside the Robe, she is a master truth and storyteller. This book is not just at times captivating and riveting but also in turns infuriating-not unlike the justice system itself. What a read "-Mark Geragos, well-known trial lawyer COURTHOUSE CONFIDENTIAL
To most people, judges are mysterious creatures. As Anthony Bourdain invited readers to follow him behind the scenes of the restaurant business in his bestseller, Kitchen Confidential, and Caitlin Doughty's Smoke Gets in Your Eyes was a revealing peak into the mysteries of what happens after death inside a mortuary, Inside the Robe shines a bright spotlight into the hidden folds of the judging world. Despite the old saw that judges should merely "follow the law," Inside the Robe lays bare how following the law can produce wildly different results depending upon the background, politics, and life experiences of each judge. Even the floor of the courthouse can mean the difference between prison and freedom.
Judge Katherine Mader spent decades as a judge in a criminal court, was the LAPD's first inspector general, a prosecutor in two murder-for-hire trials, and a defense attorney who successfully argued to spare the life of the Hillside Strangler. From her perch behind the bench, Judge Mader witnesses a parade of drug addicts, gang members, mentally ill defendants, pricey private attorneys ranging from brilliant to incompetent, jaded prosecutors, and starry-eyed true believer public defenders. Never before has the judging profession been laid bare for all to see.