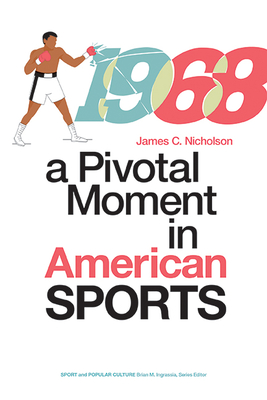 By James C. Nicholson
$34.95
Unavailable, Out of Stock, or Out of Print

Amid anti-Vietnam war protests, political assassinations, and urban unrest, the United States had descended into an era of domestic turmoil by the summer of 1968. Americans were split along nearly every imaginable line, and discord penetrated all facets of American culture. As James Nicholson proves in this thought-provoking volume, the sports arena was no exception.
Opening with Vince Lombardi’s last win as coach of the Packers in Super Bowl II and closing with Jo Namath’s Super Bowl III guarantee, 1968 charts a course through the turbulent waters of American sports over a single improbable year. Nicholson chronicles and scrutinizes a number of events that reflected-and fed-the acrimony of that year: the Masters golf tournament, in which enforcement of an arcane rule cost a foreign player a chance at victory; the disqualification of the Kentucky Derby winner for doping; Muhammed Ali’s appeal of a criminal conviction for draft evasion; an unorthodox rendition of the national anthem at the World Series that nearly overshadowed the game it preceded; and a silent gesture of protest at the Mexico City Olympics that shocked the nation and world.
While 1968 was not the first year that sports converged with social and political strife in America, echoes of the past in today’s culture wars bring a heightened relevance to the events of a half century ago. In reading Nicholson’s work, scholars and sports fans alike will receive an instructive glimpse into the nature of persistent division in the United States as it reflected in our national pastimes.

JAMES C. NICHOLSON is an instructor of history at Bluegrass Technical and Community College. He is the author of several books including The Notorious John Morrissey: How a Bare-Knuckle Brawler Became a Congressman and Founded Saratoga Race Course.