Acting in LA: How to Become a Working Actor in Hollywood (Paperback) 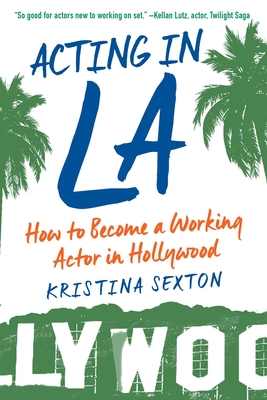 By Kristina Sexton
$19.99
Unavailable, Out of Stock, or Out of Print

Each year, hundreds of aspiring and experienced actors head to LA hoping to make it big in Hollywood. While many of them have their acting chops in shape, few realize what it actually takes to survive in Tinseltown. Even if they happen to make it onto a set, many are clueless about what’s expected of them and how they should behave. Acting in LA: How to Become a Working Actor in Hollywood is exactly what these actors need: a handbook to arriving, surviving, and thriving on- and off-set in LA.

Written by veteran Hollywood actor, acting coach, and acting teacher Kristina Sexton, this comprehensive guide takes no prisoners. With just enough snark to keep readers entertained—and on their toes—Acting in LA delivers solid advice on such topics as:

A comprehensive guide that can be utilized by actors either inside or outside Hollywood, Acting in LA relies on Kristina’s real-life experience as a working actress and exposes the pleasures, pitfalls, and practicalities of pursuing a career in acting.

Kristina Sexton is a former working actress in Los Angeles with more than twenty years of experience in the entertainment industry, including a recurring role on the TV series Greetings from Home as well as roles on The Shield, Cold Case, Crossing Jordan, and other productions. She has trained in LA, New York, and London, and she earned an MFA from the California Institute of the Arts. In addition to her own acting, Kristina has worked as an acting coach, dialogue coach, and acting teacher around the United States and in Australia. She also teaches online acting classes through her own coaching company, On Set Coaching. She currently lives in Santa Monica, California but also has a home base near Brisbane, Australia.