Whitney Houston!: The Spectacular Rise and Tragic Fall of the Woman Whose Voice Inspired a Generation (Paperback) 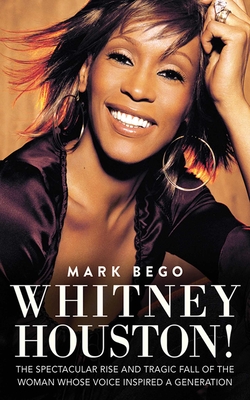 Whitney Houston (1963–2012) was a superstar. Few in the world of show business reach the career heights that she attained with what seemed such ease. Her megastardom peaked in 1992 with the release of the hit movie The Bodyguard and the international Number One hit “I Will Always Love You.” The movie soundtrack still stands as one of the bestselling albums of all time. She won six Grammy Awards, two Emmy Awards, thirty Billboard Music Awards, and twenty-two American Music Awards, and amassed a vast fortune. Her death has shocked the entertainment world and her fans.

Whitney Houston! traces the life of this American icon. Here is her childhood in Newark, New Jersey, growing up in a family with a strong musical legacy. Her mother, Cissy, sang professionally with such stars as Aretha Franklin. Her cousin was Dionne Warwick. Share the joy as Whitney signs with Arista Records and the legendary Clive Davis and becomes an international star. Here superstar biographer Mark Bego offers a unique look at her family and immense talent, the secrets behind her years of erratic behavior, the truth about her tumultuous marriage to bad boy Bobby Brown, her mother’s desperate attempt to control her, her dynamic final film role in Sparkle (which will be released posthumously), and the events that led up to her tragic death.

Whitney Houston! will stand as a singular tribute to, and a revealing look at, one of the great superstars of our time.