It Did Not Start With JFK Volume 2: The Decades of Events that Led to the Assassination of John F Kennedy (Paperback) 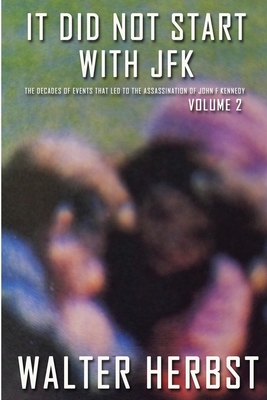 Why did Lee Harvey Oswald ask for the only attorney in America who had represented someone who tried to take over the U.S. government?

And why did President Eisenhower warn the nation about a Military-Industrial Complex in his last televised address as President?

During the Cold War, the United States looked to curtail the spread of communism by the Soviet Union. "Massive Retaliation" defined U.S. foreign policy. A perpetual war machine was created, made up of major defense contractors and right-wing military generals, whose motivation was greed and to prepare the nation for war.

The threat of nuclear holocaust allowed the CIA to grow out of control. They engaged in drug experimentation on innocents, assassinations, and used Mafia drug money to secretly fund their most heinous operations.

Not everyone agreed with this. Generals resigned in protest, and there was the concern of a possible military government takeover. With Kennedy in office, they would resort to assassination.

Despite his Marxist views, young Lee Harvey Oswald associated with Fascists and shared their right-wing ideology. There is physical evidence that Marine Oswald's defection to the Soviet Union in 1959 was a CIA operation to make it seem he died in Russia. A Soviet "sleeper agent" returned to the U.S., who could blame for any crime.