It All Turns on Affection: The Jefferson Lecture and Other Essays (Paperback) 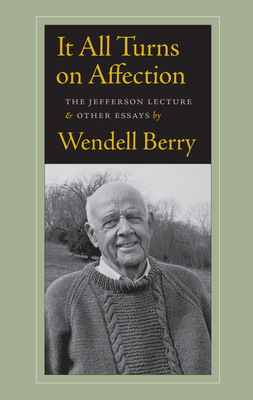 An impassioned and rigorous appeal for reconnection to the land and human feeling by one of America’s most heartfelt and humble writers.

When he accepted the invitation to deliver The Jefferson Lecture—our nation’s highest honor for distinguished intellectual achievement—Wendell Berry decided to take on the obligation of thinking again about the problems that have engaged him throughout his long career. He wanted a fresh start, not only in looking at the groundwork of the problems facing our nation and the earth itself, but in gaining hope from some examples of repair and healing even in these times of Late Capitalism and its destructive contagions. As a poet and writer he understood already that much can be gleaned from looking at the vocabulary of these problems themselves and how we describe them. And he settled on “affection” as a method of engagement and solution. The result is the greatest speech he has delivered in his six decades of public life. It All Turns on Affection will take its place alongside The Unsettling of America and The Gift of Good Land as major testaments to the power and clarity of his contribution to American thought.

Also included are a small handful of other recent essays and a wonderful conversation between Mr. Berry, his wife Tanya Berry, and the head of the National Endowment of the Humanities Jim Leech, which took place just after the award was announced. The result offers a wonderful continuation of the long conversation Berry has had with his readers over many years and as well as a fine introduction to his life and work.

“These powerful, challenging essays show why Berry’s vision of a sustainable, human–scaled society has proven so influential.” —Publishers Weekly

“Wendell Berry is one of those rare individuals who speaks to us always of responsibility, of the individual cultivation of an active and aware participation in the arts of life.” —The Bloomsbury Review

Wendell Berry is the author of fifty books of poetry, fiction, and essays. He was recently awarded the Cleanth Brooks Medal for Lifetime Achievement by the Fellowship of Southern Writers and the Louis Bromfield Society Award. For over forty years he has lived and farmed with his wife, Tanya, in Kentucky.

Praise for It All Turns on Affection

"These powerful, challenging essays show why Berry's vision of a sustainable, human–scaled society has proven so influential." —Publishers Weekly