Rules for Patriots: How Conservatives Can Win Again (Paperback) 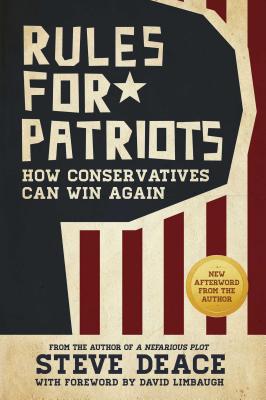 Time is running out on American exceptionalism. The light of liberty is flickering. At no point since we still had the Redcoats on our shores has freedom been more imperiled. This time it's not an invading foreign power that threatens us, but our own government gone wild— unhinged from its Constitutional limits. Many great books have been written about what we should believe and why, or why the Left's beliefs are flawed, but never before has a book been written that shows how to do what we believe. Until now. The Left has its playbook, Saul Alinsky's infamous Rules for Radicals. Now the good guys have theirs.

Steve Deace is the author of numerous books, including the #1 bestseller Faucian Bargain: The Most Powerful and Dangerous Bureaucrat in American History, and A Nefarious Plot—which was also adapted into a major motion picture. He broadcasts each weekday on BlazeTV and lives in Iowa with his wife and kids.

“If you want to be able to say 'you're fired' to the people plunging this great country of ours down the drain, this book is for you. Steve Deace is one of the rising stars in conservative media, and he's able to tackle serious subject matter in a winsome way that's so easy to understand, even a Washington, D.C. politician can get it.”
— Donald Trump, American business magnate

“In Rules for Patriots, Steve Deace lays out a blue print for victory for conservatives–a blueprint based on drawing stark contrasts rather than painting in shades of gray. Deace calls for conservatives to fight rather than retreat, recognizing that without a fight, the Left will never back down.”
— Ben Shapiro, bestselling author of The People Vs. Barack Obama and Bullies