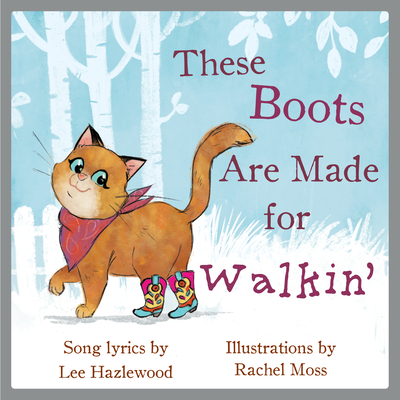 Lee Hazlewood's tough-talkin' hit song (popularized by Nancy Sinatra) is adapted into a playful children's book about the inner life of a jealous cat.

These Boots Are Made for Walkin' is an adorable story of friendship and family set against the backdrop of Lee Hazlewood's iconic song. While there have been numerous recordings over the past several decades, "These Boots Are Made for Walkin'" was originally recorded by Nancy Sinatra and released in early 1966 to instant success. A #1 Billboard hit in the US, UK, Canada, and Australia that was nominated for three GRAMMYs, Hazlewood's song continues to be embraced to this day.

With lyrics by Lee Hazlewood and illustrations by Rachel Moss, this captivating picture book tells the story of a boy and his extremely attached and very jealous cat who must adapt to the introduction of a new family member--a puppy. The funny story line and delightful images are sure to have the entire family curled up and laughing together, pets included

"'These Boots Are Made for Walkin'' is one of the most famous pop songs of all time."
--New York Times

"The hit written by Lee Hazelwood took pop to places it had only previously fantasized about...This oddball song was a tough-talkin', heavy-stridin', even fetishistic assertion of grrrl power..."
--Financial Times

Rachel Moss (illustrator) is an illustrator in love with the bright colors and vibrant energy of the Caribbean. She was born in Jamaica and studied animation in England at the University for the Creative Arts. Moss now lives in Jamaica where she spends her days illustrating children's books such as Respect with song lyrics by Otis Redding, African with song lyrics by Peter Tosh, I Am a Promise by Shelly Ann Fraser Pryce, Abigail's Glorious Hair, and Milo & Myra Learn Manners with Mr. Mongoose.