Dracula FAQ: All That's Left to Know about the Count from Transylvania (Paperback) 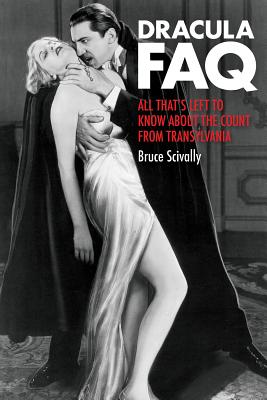 By Bruce Scivally
$19.99
Unavailable, Out of Stock, or Out of Print

Dracula FAQ unearths little-known facts about both the historical and literary Dracula. The 15th-century warlord Vlad III, known as Vlad the Impaler and Dracula (son of the Dragon), became a legendary figure in his native Wallachia. Four hundred years later, Irish author Bram Stoker appropriated Dracula's name for a vampire novel he spent seven years researching and writing. Considered one of the great classics of Gothic literature, Dracula went on to inspire numerous stage plays, musicals, movies, and TV adaptations - with actors as diverse as Bela Lugosi, John Carradine, Christopher Lee, Jack Palance, Frank Langella, Louis Jourdan, Gary Oldman, and Gerard Butler taking on the role of the vampire king. And with Dracula proving the popularity of vampires, other bloodsuckers rose from their graves to terrify book, movie, and TV audiences - from Barnabas Collins of Dark Shadows to The Night Stalker to the vampires of True Blood on the small screen, and Interview with the Vampire and Twilight on the big screen. More recently, Dracula has been resurrected for a TV series starring Jonathan Rhys Meyers and a feature film starring Luke Evans. Dracula FAQ covers all of these and more, including the amazing stories of real-life vampires.