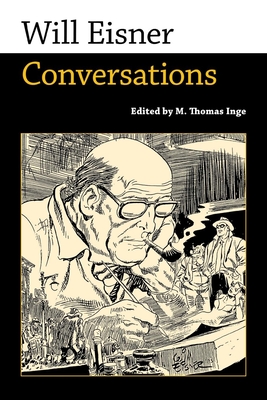 By M. Thomas Inge (Editor)
This Book Is Not Sold Online - Inquire In Store

Will Eisner's innovations in the comics, especially the comic book and the graphic novel, as well as his devotion to comics analysis, make him one of comics' first true auteurs and the cartoonist so revered and influential that cartooning's highest honor is named after him. His newspaper feature The Spirit (1940-1952) introduced the now-common splash page to the comic book, as well as dramatic angles and lighting effects that were influenced by, and influenced in turn, the conventions of film noir. Even in his tales of crime fighting, Eisner's writing focused on everyday details of city life and on contemporary social issues. In 1976, he premiered A Contract with God, and Other Tenement Stories, a collection of realist cartoon stories that paved the way for the modern "graphic novel." His 1985 book, Comics and Sequential Art, was among the first sustained analyses and overviews of the comics form, articulating theories of the art's grammar and structure. Eisner's studio nurtured such comics legends as Jules Feiffer, Wally Wood, Lou Fine, and Jack Cole. Will Eisner: Conversations, edited by comics scholar M. Thomas Inge, collects the best interviews with Eisner (1917-2005) from 1965 to 2004. Taken together, the interviews cover the breadth of Eisner's career with in-depth information about his creation of The Spirit and other well-known comic book characters, his devotion to the educational uses of the comics medium, and his contributions to the development of the graphic novel.