After the Fall, Before the Fall, During the Fall (Paperback) 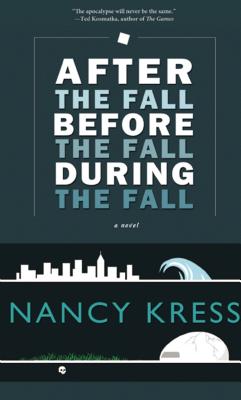 2012 Nebula Award Winner
2012 Locus Award Winner
2013 Hugo Nominee
2013 Sturgeon Award Nominee In the year 2035, all that is left of humanity lives in the Shell. No one knows why the Tesslies attacked in 2014, devastated the environment, and nearly destroyed humanity. Or why the aliens imprisoned twenty-six survivors in a sterile enclosure built on the barren remains of the Earth. Fifteen-year-old Pete, one of only six children born in the Shell, is determined to lead humanity to a new beginning. But Pete struggles to control his anger as, one by one, the survivors sicken and die. Although the Earth appears to be slowly healing, the Shell's inhabitants may not live long enough to see it. The only chance for humanity lies within brief time portals. Peter and the survivors hatch a desperate plan: to increase their numbers by abducting children from the past. In the year 2013, a brilliant CIA consultant sees a pattern in seemingly unrelated kidnappings. As Julie Kahn's predictive algorithms reveal that the world is in imminent danger, she discovers that she may also play a role in its possible rebirth. Julie and Pete are rapidly converging in time?a chance encounter between them may be the Earth's only hope.

Nancy Kress is the best-selling author of twenty science-fiction and fantasy novels, including Beggars in Spain, Probability Space, and Steal Across the Sky. She has also published four short-story collection and three books on the fundamentals of writing. Kress frequently explores biology and genetic engineering in her fiction, as in her acclaimed Beggars series and her bio-thriller, Dogs. She is a five-time Nebula Award winner and the recipient of two Hugos, the Sturgeon, and Campbell awards. Her fiction has been translated into nearly two dozen languages, including Klingon. She teaches at venues including the Clarion Writers' Program and as a guest professor at the University of Leipzig in Germany.

This isn’t the usual post-environmental apocalypse/alien invasion survival book.... Readers of science fiction and those interested in environmental issues will question the current wisdom about our environment and climate science, as well as how much effect humans mayor may nothave on the future.”
School Library Journal

After the Fall, Before the Fall, During the Fall is a highly intelligent, sublimely understated glimpse into humankind’s futureit’s comparable in thematic impact to Walter M. Miller, Jr.’s classic A Canticle for Leibowitz, and that is saying something. Simultaneously disheartening and inspiring, this novel’s ultimate power is very much like the mega-tsunami referenced within its pagesyou won’t see it coming, but when it hits you, you will be swept away.”
Paul Goat Allen, Barnes & Noble.com

Nancy Kress is one of the best science-fiction writers working today. Her use of science is tricky and thought-provoking, her command of fiction sharp and full of feeling.”
Kim Stanley Robinson, author of the Mars Trilogy and The Years of Rice and Salt

An ecological apocalypse so real that it’s like a three-dimensional object that can be viewed from all sides.”
Ted Kosmatka, author of The Games and The Ascendant

...haunting, memorable, and a perfect example of how to write a future post-apocalyptic dystopia that is both effectively bleak, but with the all-important factor of human tenacity. Absolutely recommended.”
The Book Smugglers

Superstar SF and fantasy author Nancy Kress returns with After the Fall, Before the Fall, During the Fall, an elegant novella that combines several wildly different science fiction ideas into a tight package. There’s a little bit of everything here: time travel, hard science, environmental collapse, aliens, post-apocalyptic dystopia. It may sound hard to combine all of these in such a short format, but Nancy Kress makes it work.”
Tor.com

...three narrative lines eventually converge and complement each other, and Kress handles this with her usual superior craftsmanship.”
Locus

Nancy Kress displays all her usual strengths in After the Fall, Before the Fall, During the Fall: strong plotting, fast-paced action, complex and interesting characters, thought-provoking speculation. But there’s something more here: a beautiful meditation on the fate of the earth, an elegy, a warningand a glimpse of hope.”
Lisa Goldstein, author of The Red Magician and The Uncertain Places

This is Nancy Kress in top form, but more importantly, this is SF done right. Here are big ideas about the environment and the future of humanity, married to an intimate story of family, community, and motherhood. With aliens and time travel to boot! I don’t know of another writer who balances the global and the personal with such skill. I inhaled this story, and was sorry for it to end.”
Daryl Gregory, author of Unpossible and The Devil’s Alphabet

This story, of the terrible choices people must make in the face of ecological catastrophe, asks wrenching questionsWhat does it take to remain human? What is survival worth?’and answers with the authority that Kress always brings to bear on both science and humanity.”
Nicola Griffith, author of Slow River and Always

The book is typical Kress, which means impossible to put down. A gripping tale of human survival.”
Jack McDevitt, author of Infinity Beach and Echo

After the Fall, Before the Fall, During the Fall is the coming-of-age story for the human race. Nancy Kress has written a chillingly plausible tale of the end of the world.”
Mary Robinette Kowal, author of Shades of Milk and Honey

I highly recommend this book.”
Nerds in Babeland