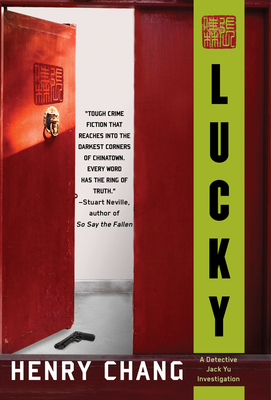 This is book number 5 in the A Detective Jack Yu Investigation series.

Chinatown gang leader “Lucky” Louie was shot outside of a Chinatown off-track betting establishment on the thirteenth of January, and lay in a coma for 88 days, waking on Easter Sunday. The number 88 is a double-helix, double-lucky Chinese number; religion and superstition all lean Lucky’s way.

But Detective Jack Yu, Lucky’s boyhood blood brother, fears his friend’s luck is about to run out. When Lucky embarks on a complex and daring series of crimes against the Chinatown criminal underground, Jack races to stop him before his enemies do so—permanently.

Henry Chang was born and raised in New York’s Chinatown, where he still lives. He is a graduate of Pratt Institute and CCNY. He is the author of Chinatown Beat, Year of the Dog, Red Jade, and Death Money, also in the Detective Jack Yu series.

“Chang, who was born and raised and still lives in Chinatown, evokes his neighborhood with loving detail.”
—AARP

“A turbo-charged requiem for a blood brotherhood rooted in an impossibly distant past.”
—Kirkus Reviews

“Yu struggles between his loyalties formed growing up in New York’s Chinatown and his role as a police officer in the very same neighborhood… The sparse writing infused with Chinatown culture will appeal to those who are drawn to noir mysteries with a rich cultural component.”
—Library Journal

“For readers who relish noir suspense, it doesn’t get any better than this.”
—The Boston Globe

“Classic noir, filled with longing, violence, and that uniquely urban melancholy, but it also brings something new to the table, a loving specificity of a people and place, the multicultures of New York’s Chinatown, that has rarely if ever been encountered in fiction before. A real discovery.”
—Richard Price, author of Lush Life