Tell Me Again How a Crush Should Feel: A Novel (Hardcover) 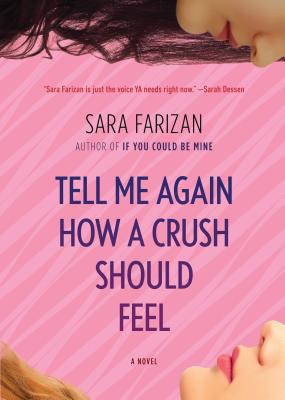 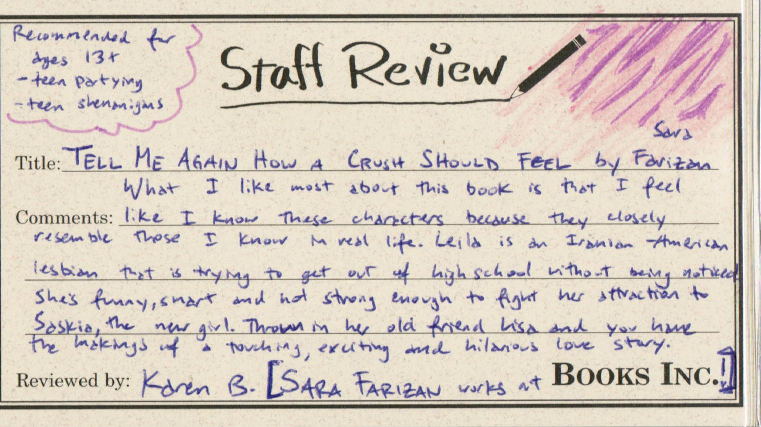 What I like most about this book is that I feel like I know these characters because they closely resemble those I know in real life. Leila is an Iranian American lesbian that is trying to get out of high school without being noticed. She’s funny, smart, and not strong enough to fight her attraction to Saskia, the new girl. Throw in her old friend Lisa and you have the makings of touching, exciting, and hilarious love story. (Ages 14+) Reviewed by Karen B. of Compass Books, SFO

“Both personal and universal, this is a compelling story about high school, family and owning up to who you really are. Farizan is just the voice YA needs right now. Trust me, you'll be glad you listened.” --Sarah Dessen

Leila has made it most of the way through Armstead Academy without having a crush on anyone, which is something of a relief. As an Iranian American, she’s different enough; if word got out that she liked girls, life would be twice as hard. But when beautiful new girl Saskia shows up, Leila starts to take risks she never thought she would, especially when it looks as if the attraction between them is mutual.

Struggling to sort out her growing feelings and Saskia’s confusing signals, Leila confides in her old friend, Lisa, and grows closer to her fellow drama tech-crew members, especially Tomas, whose comments about his own sexuality are frank, funny, wise, and sometimes painful. Gradually, Leila begins to see that almost all her classmates are more complicated than they first appear to be, and many are keeping fascinating secrets of their own.

Sara Farizan is an Iranian American writer and ardent basketball fan who was born in and lives near Boston. The award-winning author of If You Could Be Mine and Tell Me Again How a Crush Should Feel, she has an MFA from Lesley University and a BA in film and media studies from American University. Here to Stay is her third novel.

“Farizan exceeds the high expectations she set with her debut, If You Could Be Mine, in this fresh, humorous, and poignant exploration of friendship and love, a welcome addition to the coming-out/coming-of-age genre.” —Publishers Weekly, starred review

“A warm and uplifting coming-out story . . . An appealing cast of well-drawn characters--Christina, a vampire-obsessed theater tech-crew member, Tomas, the gay director and taskmaster of the middle school play she helps with, and Tess, a refreshingly confident nerdy girl--makes the story shine. Lessons abound . . . but skilful character development keeps Leila's discoveries from ever feeling didactic. Funny, heartwarming and wise.” —Kirkus Reviews

“With a plot that unfolds naturally, good writing, and vivid character development that leaves readers alternately cringing and aching for the protagonist, teens will find a satisfying coming-of-age novel. Fragments of Persian culture are incorporated smoothly within the narrative. Books featuring gay and lesbian teens of Middle Eastern descent are rare, and this engaging high school drama fills that need. Leila’s coming out to her friends and family, and her fear of disappointing her parents will resonate with all young adults.” —School Library Journal