The Silk Map: A Gaunt and Bone Novel (Paperback) 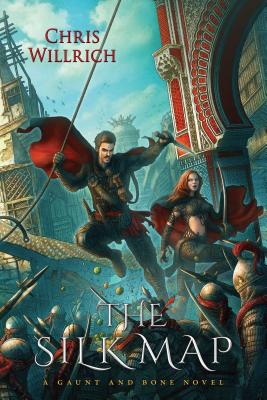 By Chris Willrich
$21.00
Unavailable, Out of Stock, or Out of Print

It's Brent Weeks meets China Mieville in this wildly imaginative fantasy adventure featuring high action, elegant writing, and sword and sorcery with a Chinese flare. At the end of The Scroll of Years, the poet Persimmon Gaunt and her husband, the thief Imago Bone, had saved their child from evil forces at the price of trapping him within a pocket dimension. Now they will attempt what seems impossible; they will seek a way to recover their son. Allied with Snow Pine, a scrappy bandit who's also lost her child to the Scroll of Years, Gaunt and Bone awaken the Great Sage, a monkeylike demigod of the East, currently trapped by vaster powers beneath a mountain. The Sage knows of a way to reach the Scroll -- but there is a price. The three must seek the world's greatest treasure and bring it back to him. They must find the worms of the alien Iron Moths, whose cocoons produce the wondrous material ironsilk. And so the rogues join a grand contest waged along three thousand miles of dangerous and alluring trade routes between East and West. For many parties have simultaneously uncovered fragments of the Silk Map, a document pointing the way toward a nest of the Iron Moths. Our heroes tangle with Western treasure hunters, a blind mystic warrior and his homicidal magic carpet, a nomad princess determined to rebuild her father's empire, and a secret society obsessed with guarding the lost paradise where the Moths are found -- even if paradise must be protected by murder.

Chris Willrich is the author of The Scroll of Years, the first Gaunt and Bone Novel, and the sword-and-sorcery tales of Persimmon Gaunt and Imago Bone. Until recently he was a children's librarian for the Santa Clara County Library System, in the San Francisco Bay Area. His work has appeared in Asimov's, Beneath Ceaseless Skies, Black Gate, Fantasy and Science Fiction, Flashing Swords, The Mythic Circle, and Strange Horizons.

“The Silk Map is an exciting adventure set in a world as lovingly constructed as Frank Herbert’s Dune or Lovecraft’s ghoul-haunted nightmares. Legends from the Mongol and Islamic empires to ancient China hover just below the surface. Xanadu and Shambala appear with slightly different names. Heroes Gaunt and Bone careen from one misadventure to the next, with companions that include a second-rate flying carpet (with murderous tendencies) and a lovelorn zombie. Did I mention that the story is also funny? I loved it.”
—Nancy Farmer, winner of the National Book Award and three Newbery honors, author of The House of the Scorpion

“The perfect sort of sword and sorcery—elegant, swift, and as sharp as a blade. Willrich has the light touch of Leiber, the imaginative fecundity of Moorcock, and a wit all his own; thrilling and charming all at once, oh, and bloody good, too. This is sword and sorcery as it should be written. Chris understands the poetry of fantasy, and the wry sense of humor that sustains even the darkest of tales. Adventure lies ahead, and Chris is a sure and delightful guide.”
—Trent Jamieson, author of the Death Works trilogy

"Gaunt and Bone are the Han and Leia of heroic fantasy."
—Howard Tayler, creator of the Hugo Award-nominated Schlock Mercenary

"Reading Chris Willrich feels a bit like playing Dungeons and Dragons® with a drunken Will Shakespeare."
—Saladin Ahmed, Hugo award-nominated author of Throne of the Crescent Moon

"Persimmon Gaunt and Imago Bone are just as delightful when pondering poetry or philosophy as when stealing a magic sword."
—Scott H. Andrews, editor of Beneath Ceaseless Skies