Letters to Wilfred B. Talman and Helen V. and Genevieve Sully (Paperback) 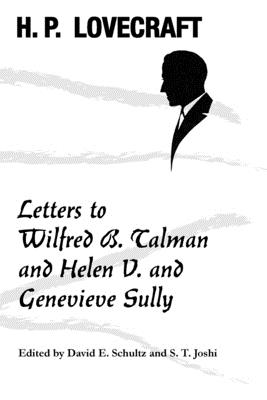 Wilfred B. Talman was a late member of the Kalem Club, the group of literati who gathered around H. P. Lovecraft during his years in New York (1924-26). In the 1920s Talman attempted to write weird fiction, and Lovecraft's letters to him feature extensive advice on the story he revised for Talman, "Two Black Bottles"; Lovecraft also wrote a 6000-word synopsis for a story, "The Pool," that Talman never wrote; the synopsis is here presented in an appendix. But Talman soon moved to other interests, and in his correspondence Lovecraft discusses such diverse subjects as Dutch settlement of the American colonies, the Greek calendar, and his wide-ranging travels.

Helen V. Sully is one of Lovecraft's few women correspondents. A friend of Clark Ashton Smith, she made the long trip from California to Rhode Island to see Lovecraft, and he treated her with his customary old-world courtesy. In their subsequent correspondence, Lovecraft attempted to act as consoler to Sully (who had apparently lapsed into depression), and his sage words on ethics, values, and contemporary civilization are still of value. Lovecraft also exchanged a few letters with Helen's mother, Genevieve Sully.

As with other volumes in the Letters of H. P. Lovecraft series, this volume prints all surviving letters unabridged and with extensive annotations by David E. Schultz and S. T. Joshi, along with numerous writings--prose, essays, and poetry--by Lovecraft's correspondents.