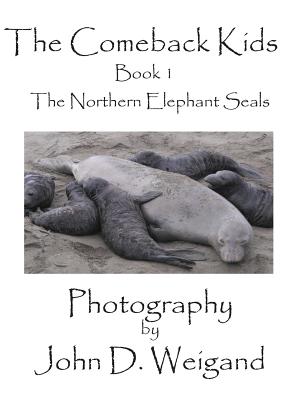 The Northern Elephant Seal, Mirounga angustirostris, the guys with the great big noses and the squabbling harems, are the really big comeback kids; and we mean that, because not only are the elephant seals really big, they have made a really big comeback Hundreds of thousands of these really fun creatures once inhabited the Pacific Ocean, and then they were wholesale slaughtered in the 1800's for their blubber that could be rendered into oil. Only 50-100 of them were left to roam the vast ocean where they spend most of their time until it is time for them to come ashore to molt or mate. They lumber across land very slowly and they mate and molt on land, so the elephant seals were a very easy target for their human hunters. In 1922 the Mexican government enacted laws to protect them, and a few years later the United States of America did the very same thing. Miraculously these grand animals began to slowly reappear Today it is estimated there are about 160,000 elephant seals Males have a life expectancy of 14 years, while a female elephant seal lives to the ripe old age of 20 They are pinnipeds and molt like all pinnipeds do (to get rid of old skin and hair) but they do that all at once, once a year, during the spring and summer; and exactly when they molt depends on the age that they are, and who they are The females and juveniles molt from April to May, and the young males molt from May to June, while the Adult males molt from July to August. They come to shore to mate and to give birth in December and hang out on the beach for a few months, because the process of birthing and mating and weaning must take its proper course. The female mates approximately 24 days after giving birth. The males are 14 to 16 feet in length and weigh up to two and a half tons each, and the females are a petite 10 to 12 feet in length and weigh a mere 1200 to 2000 pounds. This is the first book in "The Comeback Kids" Book Series. It is meant to inspire and to make you realize anything is possible in this world if we stop doing what is wrong and do what is right, and give mother nature the opportunity to nourish herself. The Photographs by John D. Weigand were taken with reverence at the direction of this author at the seal rookery at Piedras Blancas, at the southern end of Big Sur on the California coast, twelve miles north of Cambria.