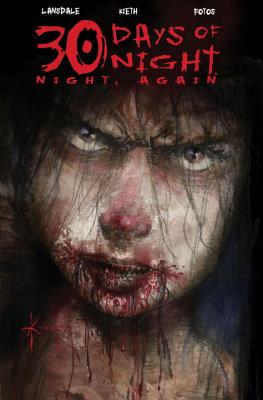 By Joe R. Lansdale, Sam Kieth (Illustrator)
This Book Is Not Sold Online - Inquire In Store
Out of Print

Fleeing the site of a secondary vampire infestation in the cold, wilds of Alaska, a band of survivors arrive at a climate change facility during the final days of a long period of extended daylight. The inhabitants of the research compound are trying to determine the nature of a strange object found in the ice when the survivors arrive, leading to a frightening and bloody confrontation between humans and vampires — and an odd and unexpected guest!

Joe R. Lansdale is the author of over thirty novels and numerous short stories. His work has appeared in national anthologies, magazines, and collections, as well as numerous foreign publications. He has written for comics, television, film, newspapers, and Internet sites. His work has been collected in eighteen short-story collections, and he has edited or co-edited over a dozen anthologies.

Lansdale has received the Edgar Award, eight Bram Stoker Awards, the Horror Writers Association Lifetime Achievement Award, the British Fantasy Award, the Grinzani Cavour Prize for Literature, the Herodotus Historical Fiction Award, the Inkpot Award for Contributions to Science Fiction and Fantasy, and many others.

Sam Kieth is a comic book writer and illustrator, best known as the creator of The Maxx and Zero Girl.  Kieth first came to prominence in 1984 as the inker of Matt Wagner's Mage, and a year later as the inker of Fish Police. In 1989, he penciled the first five issues (the "Preludes & Nocturnes" story arc) of writer Neil Gaiman's celebrated series The Sandman and collaborated with Alan Grant on a Penguin story in Secret Origins Special #1. In 1993 Kieth created the original series The Maxx for fledgling publisher Image Comics. The Maxx ran 35 issues, all of which were plotted and illustrated by Kieth. William Messner-Loebs scripted #1-15 and Alan Moore wrote #21. In 1995, The Maxx was adapted as part of MTV's short-lived animation series MTV's Oddities. After taking a break from comics to pursue other interests, Kieth created the series Zero Girl for DC Comics' Wildstorm imprint in 2001. He followed that with the drama Four Women later that year and Zero Girl: Full Circle in 2003. In 2010, Kieth wrote and illustrated the original hardcover graphic novel Arkham Asylum: Madness, which spent two weeks on The New York Times Best Seller list, reaching number five in the category of "Hardcover Graphic Books."