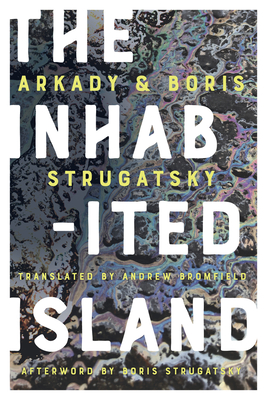 By Arkady Strugatsky, Boris Strugatsky, Andrew Bromfield (Translated by)
$19.99
In Stock Now - Click Title to See Store Inventory. Please allow up to 48-hours for Curbside Pickup orders to be processed.

When Maxim Kammerer, a young space explorer from twenty-second-century Earth, crash-lands on an uncharted world, he thinks of himself as a latter-day Robinson Crusoe. Eager to establish first contact with the planet’s humanlike inhabitants, he finds himself increasingly entangled in their primitive way of life. After his experiences in their nightmarish military, criminal justice, and mental health systems, Maxim begins to realize that his sojourn on this radioactive and war-scarred world will not be a walk in the park.

The Inhabited Island is one of the Strugatsky brothers’ most popular and acclaimed novels, yet the only previous English-language edition (Prisoners of Power) was based on a version heavily censored by Soviet authorities. Now, in a sparkling new edition by award-winning translator Andrew Bromfield, this land-mark novel can be newly appreciated by both longtime Strugatsky fans and new explorers of the Russian science fiction masters’ astonishingly rich body of work.

Arkady & Boris Strugatsky were famous and popular Russian writers of science fiction, with more than twenty-five novels and novellas to their names, including The Doomed City, Hard to Be a God, Monday Starts on Saturday, The Snail on the Slope, and Roadside Picnic. Their books have been widely translated and made into a number of films.

“With its harsh portrayals of nuclear devastation and demented autocracy, this book is bound to spark curiosity about the political purposes of Soviet science fiction. . . . The narrative proceeds with a clarity and firmness not quite like anything in even the finest American science fiction. . . . A work of unmistakable stature.” —Kirkus Reviews on Prisoners of Power, the previous English translation of The Inhabited Island

“Bromfield’s masterly translation manages to preserve layered language. . . . Highly enjoyable and impossible to compare to any other work.” —Publishers Weekly on Monday Starts on Saturday, translated by Andrew Bromfield