In the Struggle: Scholars and the Fight Against Industrial Agribusiness in California (Paperback) 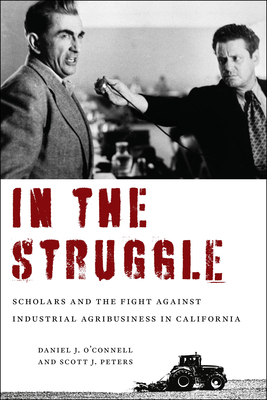 A call to action in an ongoing battle against industrial agriculture

From the early twentieth century and across generations to the present, In the Struggle brings together the stories of eight politically engaged scholars, documenting their opposition to industrial-scale agribusiness in California. As the narrative unfolds, their previously censored and suppressed research, together with personal accounts of intimidation and subterfuge, is introduced into the public arena for the first time. In the Struggle lays out historic, subterranean confrontations over water rights, labor organizing, and the corruption of democratic principles and public institutions. As California's rural economy increasingly consolidates into the hands of land barons and corporations, the scholars' work shifts from analyzing problems and formulating research methods to organizing resistance and building community power. Throughout their engagement, they face intense political blowback as powerful economic interests work to pollute and undermine scientific inquiry and the civic purposes of public universities. The findings and the pressure put upon the work of these scholars--Paul Taylor, Ernesto Galarza, and Isao Fujimoto among them--are a damning indictment of the greed and corruption that flourish under industrial-scale agriculture. After almost a century of empirical evidence and published research, a definitive finding becomes clear: land consolidation and economic monopoly are fundamentally detrimental to democracy and the well-being of rural societies.

Daniel J. O'Connell (Author) Daniel O'Connell is executive director of the Central Valley Partnership, a regional nonprofit organization and progressive network of labor unions, environmental organizations, and community groups spanning the San Joaquin Valley. Trained as a multidisciplinary ethnographer, he holds an MS in International Agricultural Development from University of California, Davis, and a PhD in Education from Cornell University. As a politically engaged scholar, his work is dedicated to achieving social, racial, environmental, and economic justice in California. Scott J. Peters (Author) Scott Peters is a professor in the Department of Global Development at Cornell University and a historian of American higher education's public purposes and work. He has spent the past twenty years as a leader in the civic engagement movement in American higher education, most recently serving as faculty co-director of Imagining America: Artists and Scholars in Public Life (IA). He is the lead author of Democracy and Higher Education: Traditions and Stories of Civic Engagement. He is also co-editor of the Cornell University Press book series, "Publicly Engaged Scholars: Identities, Purposes, and Practices.