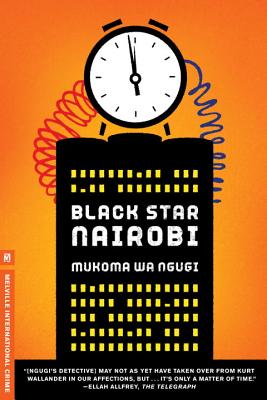 Two cops—one American, one Kenyan—team up to track down a deadly terrorist.

It’s December 2007. The Kenyan presidential elections have gotten off to a troubled start, with threats of ethnic violence in the air, and the reports about Barack Obama on the campaign trail in the United States are the subject of newspaper editorials and barstool debates. And Ishmael and O have just gotten their first big break for their new detective agency, Black Star.

A mysterious death they’re investigating appears to be linked to the recent bombing of a downtown Nairobi hotel. But local forces start to come down on them to back off the case, and then a startling act of violence tips the scales, setting them off on a round-the-globe pursuit of the shadowy forces behind it all. A thrilling, hard-hitting novel, from the author of Nairobi Heat, a major new crime talent.

MUKOMA WA NGUGI is a novelist and poet, whose books include the novel Nairobi Heat and the poetry collection Hurling Words at Consciousness. He was short listed for the Caine Prize for African writing in 2009 and for the 2010 Penguin Prize for African Writing.

His columns have appeared in the Guardian, International Herald Tribune, and the Los Angeles Times, and he has been a guest on Democracy Now, Al Jazeera, and the BBC World Service. His stories and poetry have been published in the Kenyon Review, Kwani!, Chimurenga and Tin House Magazine, among other places.

Mukoma was born in 1971 in Evanston, Illinois and grew up in Kenya before returning to the United States for his undergraduate and graduate education. He is currently a professor of English at Cornell University.

“Stellar… In a country rife with tribal violence, the relationship between these men offers a unique perspective on postcolonial racism and global politics.” —Milwaukee Journal Sentinel

“This hard-boiled crime novel packs an intense amount of action within its fast-paced pages… An interesting and unusual read.” —Library Journal

"Nairobi Heat takes us to Kenya with a refreshing authority... Besides the usual fun and thrill of crime novels, what makes the book a delicious read is that it’s also packed with engaged and relevant social commentary."
—The New York Times

"If you're weary of the glut of Scandinavian crime fiction, take a trip to Kenya's teeming capital city. " —The New York Post

"A fast-paced hard-boiled crime novel... We suggest you pick up a copy if you know what's good for you." —Flavorwire

"Just as the works of James Ellroy and Carl Hiaasen dig beneath the glitter of Hollywood and South Beach, respectively, to reveal a nasty, fetid underside, [Nairobi Heat] rips away images of the Sahara and safaris and goes beyond nightly news pictures of deprivation."—The Fort Worth Star-Telegram

"Ishmael Fofona, Ngugi's detective, may not as yet have taken over from Kurt Wallander in our affections, but I'm hoping it's only a matter of time."—The Telegraph (UK)

"Sizzling...an action-packed cross-cultural ride, crackling with detail garnered from the author's experience reporting on the African communities in which this story is set." —Barnes & Noble Review

"An engaging insider's view of the cultural divide between Americans and Africans." —Publishers Weekly

“Ngugi’s ability to weave a complex narrative, which connects crime and racial tensions in the US to an in-depth knowledge of Kenya and its nuances, to Rwanda and its genocide past within this African crime thriller, is nothing but the work of a genius craftsman and wordsmith.”—New African Magazine