From the Realm of a Dying Sun. Volume I: IV. Ss-Panzerkorps and the Battles for Warsaw, July-November 1944 (Hardcover) 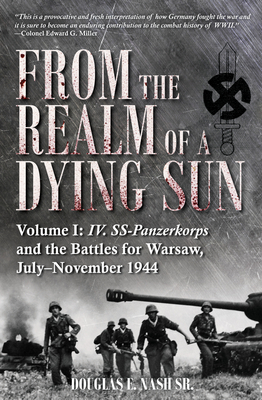 A detailed account of Herbert Otto Gille's IV SS-Panzerkorps that participated in many of the key battles fought on the Eastern Front during the last year of WWII.

During World War Two, the armed or Waffen-SS branch of the Third Reich's dreaded security service expanded from two divisions in 1940 to 38 divisions by the end of the war, eventually growing to a force of over 900,000 men until Germany's defeat in May 1945. Not satisfied with allowing his nascent force to be commanded in combat by army headquarters of the Wehrmacht, Heinrich Himmler, chief of the SS, began to create his own SS corps and army headquarters beginning with the SS-Panzerkorps in July 1942. As the number of Waffen-SS divisions increased, so did the number of corps headquarters, with 18 corps and two armies being planned or activated by the war's end.

The histories of the first three SS corps are well known - the actions of I, II, and III (Germanic) SS-Panzerkorps and their subordinate divisions, including the Leibstandarte SS Adolf Hitler, Das Reich, Hitlerjugend, Hohenstaufen, Frundsberg and Nordland divisions, have been thoroughly documented and publicized. Overlooked in this pantheon is another SS corps that never fought in the west or in Berlin but one that participated in many of the key battles fought on the Eastern Front during the last year of the war - the IV SS-Panzerkorps. Activated during the initial stages of the defense of Warsaw in late July 1944, the corps, consisting of both the 3. and 5. SS-Panzer Divisions (Totenkopf and Wiking, respectively) was born in battle and spent the last ten months of the war in combat, figuring prominently in the battles of Warsaw, the attempted Relief of Budapest, Operation Spring Awakening, the defense of Vienna, and the withdrawal into Austria where it finally surrendered to U.S. forces in May 1945.

Herbert Otto Gille's IV SS-Panzerkorps was renowned for its tenacity, high morale and, above all, its lethality, whether conducting a hard-hitting counterattack or a stubborn defense in situations where its divisions were hopelessly outnumbered. Often embroiled in heated disputes with its immediate Wehrmacht higher headquarters over his seemingly cavalier conduct of operations, Gille's corps remained to the bitter end one of the Third Reich's most reliable and formidable field formations.