The Earth Moved: On the Remarkable Achievements of Earthworms (CD-Audio) 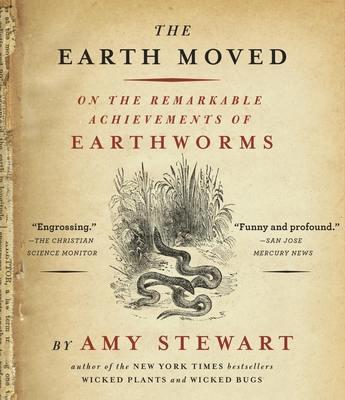 They destroy plant diseases. They break down toxins. They plough the earth. They transform forests. They’ve survived two mass extinctions, including the one that wiped out the dinosaur. Not bad for a creature that’s deaf, blind, and spineless. Who knew that earthworms were one of our planet’s most important caretakers? Or that Charles Darwin devoted his last years to studying their remarkable achievements?

Inspired by Darwin, Amy Stewart takes us on a subterranean adventure. Witty, offbeat, charming, and ever curious, she unearths the complex web of life beneath our feet and investigates the role earthworms play in cutting-edge science—from toxic cleanups to the study of regeneration.

HEATHER HENDERSON has brought her authentic, resonant voice and a full cast of characters (from a Scots nanny to a Fargo housewife) to hundreds of projects during her 20-year career. She earned her doctorate at the Yale School of Drama, and her credits include production dramaturgy on the world premiere of August Wilson’s Fences. She has published arts features and reviews in newspapers across the U.S. and has won awards for poetry and screenwriting. What seems to impress people most, though, is that she was an extra in Animal House.

“Stewart’s fascination with her subject is infectious, her writing as simple and sleek as the earthworm itself.”
—San Francisco Chronicle

“Using Darwin’s research as a starting point, [Stewart] delves into their incredible abilities and offers useful tips for the green thumbs in her audience.”
—Entertainment Weekly