The Great Convergence: Asia, the West, and the Logic of One World (Paperback) 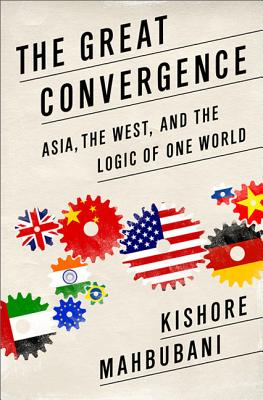 The twenty-first century has seen a rise in the global middle class that brings an unprecedented convergence of interests and perceptions, cultures and values. Kishore Mahbubani is optimistic. We are creating a new global civilization. Eighty-eight percent of the world's population outside the West is rising to Western living standards, and sharing Western aspirations. Yet Mahbubani, one of the most perceptive global commentators, also warns that a new global order needs new policies and attitudes.

Policymakers all over the world must change their preconceptions and accept that we live in one world. National interests must be balanced with global interests. Power must be shared. The U.S. and Europe must cede some power. China and India, Africa and the Islamic world must be integrated. Mahbubani urges that only through these actions can we create a world that converges benignly. This timely book explains how to move forward and confront many pressing global challenges.

Kishore Mahbubani is a veteran diplomat, student of philosophy, and celebrated author; he is currently a Distinguished Fellow at the National University of Singapore's Asia Research Institute. Mahbubani is also a former President of the UN Security Council (Jan 2001, May 2002) and the Founding Dean of the Lee Kuan Yew School of Public Policy (2004-2017). Mahbubani writes and speaks prolifically on the rise of Asia, geopolitics and global governance. His eight books and articles in the New York Times, Washington Post, Financial Times and Foreign Affairs have earned him global recognition as "the muse of the Asian century." He was inducted into the American Academy of Arts and Sciences in October 2019. More information can be found on www.mahbubani.net.

“A world adrift desperately needs global thinkers, most of all from Asia. Kishore Mahbubani fits the bill with this signal work at this critical time.”

Financial Times“[Mahbubani's] thesis is a welcome counterweight to the more familiar gloom of political scientists. The book is rich in insight into the hurdles and pitfalls that stand in the way of international co-operation. It takes a hard-headed look at the dynamics of China's rise: the threat of conflict with a US reinvented as a Pacific power, the dangerous tensions between China and India, and the west's troubled relationship with Islam among them. But the central argument is compelling…. What is clear, though, is that west and east have still to grasp the paradox deftly illuminated by Mahbubani's call for global governance. To retain real sovereignty over their national affairs, leaders will have to share it internationally.”

Nouriel Roubini, Professor of Economics at New York University's Stern School of Business and Co-founder and Chairman of Roubini Global Economics
“While I remain pessimistic for the global economy in the near-term, I share Kishore Mahbubani's long-term optimism for our world, including the emerging powers like China and India. The world order must now reinvent itself to accommodate these powers. Mahbubani's timely and brilliant book explains well both the challenges to our global order and the wise solutions that are at hand. We can create a better world. Mahbubani's book explains how. I strongly commend it.”

Lawrence H. Summers, Charles W. Eliot University Professor of Harvard University, Harvard Kennedy School
“Most of the great errors in foreign policy and diplomacy come from a failure to understand the perspective of other nations.  And this is a besetting problem for superpowers like the United States.  That is why whether they like it or not, whether they agree or disagree, it so important that Western and especially American policymakers read this important book presenting a perspective on the global trends that is very different from their own.”

The Future of Power
“Kishore Mahbubani is a thoughtful critic of the West and this book is full of provocations; some right, some wrong, but never boring. Above all, he seeks ways to reconcile the 12 per cent of the world's population who live in the West with the vast majority who do not. The result is a good and important read.”

Raghuram Rajan, Professor, University of Chicago Booth School
“Few today know Asia as well as Kishore Mahbubani, and even fewer combine it with a deep understanding of the West's strengths and frailties. In The Great Convergence, Mahbubani offers a balanced but profoundly disturbing analysis of the political challenges that face our modern, increasingly interdependent, world. His proposals on how to fix the outdated system of global governance are both refreshingly novel and eminently practical.  A truly stimulating read!”

Pascal Lamy, Director-General, World Trade Organization
"Thought provoking, sharp and full of wisdom as usual, this new book by Kishore Mahbubani not only offers in-depth analysis of world challenges today, but also offered fresh ideas on how to improve global order for the 21st century. A must read for those who are interested in power politics and the future of global governance." Christian Science Monitor

Fareed Zakaria, author of The Post-American World
"Kishore Mahbubani has done it again. He has written a book that is provocative, engaging, and always intelligent. He brings a crucial perspective to bear on global affairs, rooted in the rise of Asia but with an understanding of Europe and America as well. Rudyard Kipling said, ‘East is East and West is West and never the twain shall meet.' But they do in this book."

Kofi Annan, former UN Secretary-General
“In exploring the tensions that arise as our global community draws ever closer together, Kishore Mahbubani provides a compelling reminder that humanity is strongest when we work together for the benefit of all.”