Life is Like a Glass of Tea: Studies of Classic Jewish Jokes (Second Edition) (Paperback) 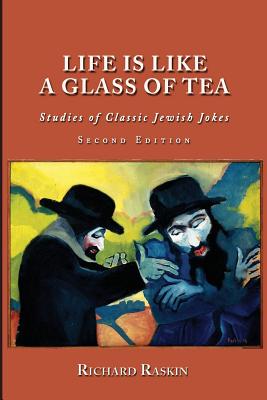 The first book on Jewish humor in which individual jokes are singled out for comprehensive study, "Life is Like a Glass of Tea" devotes a chapter to each of eight major jokes, tracing its history and variants - and looking closely at the ways in which the comic behavior enacted in the punchline can be interpreted. One of the unique properties of classic Jewish jokes is their openness to radically different interpretive options (having nothing to do with wordplay or double entendre). This openness to alternate interpretations-never before discussed in the literature on Jewish humor - gives classic Jewish jokes their special flavor, as they leave us wondering which of several possible attitudes we are expected to hold toward the comic figure. An additional chapter is devoted to the ways in which Jewish jokes tend to evolve over time and across language and cultural barriers. Throughout the book, in fact, one can see the processes that Jewish jokes undergo over decades as their comic potential is unfolded in successive stages, and when they are transplanted from European to American soil.

Now in its Second Edition, this expanded version adds two new chapters and new introductory material. It includes a 2015 Foreword by Marc Galanter, who notes that the author "is concerned not only with what makes jokes funny but with what makes some of them profound. His imaginative response to this puzzle makes this little book a distinctive and engaging contribution to the literature on Jewish jokes and on jokes generally." It will appeal to the general reader, as well as to readers especially interested in Jewish culture, the psychology of humor, religion, ethnography, and folklore.

"Richard Raskin's book on Jewish humor was the most original and useful I found in years of research on the topic. I'm delighted to see it back in print - and with added chapters "
- Ruth Wisse
Professor Emerita, Yiddish and Comparative Literature, Harvard University
Author, "No Joke: Making Jewish Humor" (2013)

"A fascinating book that explores the richness of Jewish humor. Raskin offers a thought-provoking analysis of what makes Jewish humor special. Raskin merges an understanding of Jewish culture, fresh psychological insights, and a sophisticated reading of jokes and their evolution to create a gem of a book. However, it is not just an outstanding book on Jewish humor. It is an outstanding book on humor. Period. After reading it, you won't laugh the same way again."
- Dov Cohen
Professor, Department of Psychology, University of Illinois
Co-editor, "Handbook of Cultural Psychology" (2007)

Richard Raskin is Associate Professor in the School of Communication and Culture-Media Studies at Aarhus University, Denmark. Born in Brooklyn and educated in the U.S., Raskin taught at Haverford College and Columbia University before emigrating to Denmark in 1972. He holds American and Danish doctoral degrees and teaches hands-on production courses in which students make short films and public service TV spots. His books include 'The Art of the Short Fiction Film: A Shot-by-Shot Study of Nine Modern Classics' (2002) and 'A Child at Gunpoint: A Case Study in the Life of a Photo' (2004). He writes screenplays for short fiction films including the award-winning 2012 film 'Seven Minutes in the Warsaw Ghetto.' He has also served on juries for international film festivals in numerous countries.