A Country for Dying (Paperback) 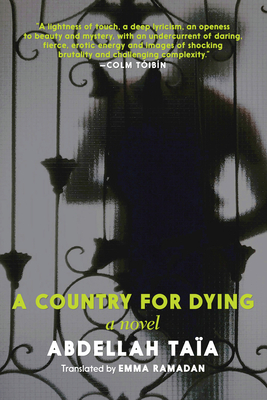 WINNER OF THE 2021 PEN TRANSLATION PRIZE

Zahira is 40 years old, Moroccan, a prostitute, traumatized by her father's suicide decades prior, and in love with a man who no longer loves her.
Zannouba, Zahira's friend and protege, formerly known as Aziz, prepares for gender confirmation surgery and reflects on the reoccuring trauma of loss, including the loss of her pre-transition male persona.
Mojtaba is a gay Iranian revolutionary who, having fled to Paris, seeks refuge with Zahira for the month of Ramadan.
Meanwhile, Allal, Zahira's first love back in Morocco, travels to Paris to find Zahira.

Through swirling, perpendicular narratives, A Country for Dying follows the inner lives of emigrants as they contend with the space between their dreams and their realities, a schism of a postcolonial world where, as Taïa writes, "So many people find themselves in the same situation. It is our destiny: To pay with our bodies for other people's future."

Born in Rabat, Morocco in 1973, Abdellah Taïa has written many novels, including Salvation Army, which he also made into an award-winning film, and Infidels (Seven Stories 2016), translated by Alison Strayer. He lives in Paris.

Translator Emma Ramadan is based in Providence, Rhode Island, where she co-owns Riffraff Bookstore and Bar. She's the recipient of an NEA fellowship, a Fulbright grant, and the 2018 Albertine Prize. Her translations include Anne Garréta's Sphinx and Not One Day, Virginie Despentes's Pretty Things, Ahmed Bouanani's The Shutters, and Marcus Malte's The Boy.

"In this novel of intersecting lives, set in Paris, Zahira, a Moroccan immigrant and a sex worker, is haunted by her father’s suicide and the disappearance of her aunt. Her trans friend, born Aziz, longs for the surgery that will allow him to become Zannouba. The city appears both as a glittering, bourgeois metropolis and as a colonial power that consumes the lives of immigrants. The characters take comfort in their shared experiences of alienation. 'As strange as it must seem, I always feel a certain pleasure with them,' Zahira says of her clients. 'I feel like a sister to these Arab and Muslim men.'" --The New Yorker

"Abdellah Taïa dramatizes the reality of Zahira and Zannouba, Moroccan prostitutes in Paris, at sea in the stormy straits between the sexes and nationalities, estranged from their families but absorbed by their loves and fantasies; this is a cri de coeur and a cri de corps, heart and body crying in the lonely city." —Edmund White

"A Country for Dying is a knife of a novel—short, sharp, and jagged. Abdellah Taïa ruthlessly uses that knife to cut away sentimental notions of love, romance, family, and nation. He exposes how colonization has shaped sexual desire, expression, and exploitation, and leaves us with a memorable, powerful work." —Viet Thanh Nguyen, author of The Sympathizer and The Refugees

"It is a brief, taut work that digs deep into the margins of society to demonstrate the many ways in which colonialism pollutes our notions of love and self. ... It feels almost meaningless to call books “timely” anymore, but the arrival of A Country for Dying during a period of widespread immigration, social distancing, and oppression of marginalized groups feels almost prescient. Its powerful lyricism, on the other hand—fully captured in Ramadan’s skillful translation—is positively timeless." --Asymptote

"The Moroccan writer Abdellah Taïa’s novel A Country for Dying (translated from the French by Emma Ramadan) depicts a Paris distinct from the stuff of Anglophone fantasies. The story follows three characters: Zahira, a forty-year-old Moroccan sex worker in love with a man who does not return her feelings; Zahira’s friend Zannouba, who undergoes gender confirmation surgery and reflects on questions of trauma and identity; and Mojtaba, a gay Iranian revolutionary who by chance stays with Zahira for the month of Ramadan. Taïa, who came out as gay in Morocco—where homosexuality is illegal—in 2006, poignantly portrays the lives of immigrants in a city and country that is frequently hostile to them, and openly questions France’s perception of itself and its immigration policies." —Rhian Sasseen, The Paris Review

"In this newly translated work of fiction, the Paris-based Moroccan writer and filmmaker looks at sexuality, desire, and identity in a post-colonial world. ... Taïa offers American readers glimpses of lives few of us are likely to see outside of this book. Lyrical and impassioned." —Kirkus Reviews

*"Immigrants in Paris seek political, economic, and sexual refuge in Taïa’s heart-wrenching tale of postcolonial identity crisis (after Infidels). Zahira, a 45-year-old prostitute, is haunted by memories of her father’s suicide in Morocco when she was a child, and of Allal, a possessive Moroccan who loved her decades earlier. In Paris, Zahira looks out for an Algerian protégé, Zannouba, on the eve of Zannouba’s sex reassignment surgery, and Mojtaba, a gay Iranian dissident, whose innocence awakens Zahira’s maternal instincts. For Zahira and others, solace eludes them in the form of lost or unrequited love, a theme Taïa distills in a nested story of Zahira’s vanished aunt, Zineb. Enlisted by the French to service soldiers in 1950s Indochina, Zineb is left adrift between the family she’s left behind and a love she can only sell. Taïa’s blunt style is shot through with an immediacy accenting the high stakes for those chased across borders and running from their own pasts (“You thought you had fled our world,” says Allal). But Zahira is not free, and Allal has not forgotten her; he is coming now to Paris, planning to kill her. In the churning gears of this compact, deeply moving novel, crises of identity prove more solvable than those of the heart." —Publishers Weekly, starred review

"This is a work that concerns itself with intimacy, with desire, and with identity—and which finds multiple permutations of each to discuss. Throw in a plot that grapples with colonialism and generational trauma and you have a complex, thoughtful novel." —Tobias Carroll, World Literature Today

"Abdellah Taïa is one of the most original and necessary voices in world literature. ... With each novel Taïa grows as an artist and expands our knowledge of what it means to be an outsider inside the Muslim world." —David Ebershoff, author of The Danish Girl and The 19th Wife

"In his new novel, A Country for Dying, Abdellah Taïa explores the lives of migrants in Paris, offering an unusual and uncomfortably real perspective on what it is to exist between places. Cut off from their own countries yet marginalised by their new home, his characters live fragmented lives that often play out at night-time or in dark, shadowy spaces. Themes such as gender, sexuality, religion and identity are explored in some detail as well, making this brief work of fiction – published by Seven Stories Press in a seamless translation by Emma Ramadan – something deeply profound and complex." --The Monthly Booking

"Taïa’s story reckons with violence and loss on an historic scale. The sins he perseverates over — colonialism, war, economic dislocation — are immense and epochal, but they exact their toll on individuals, wreaking havoc on bodies and the sense of place, belonging, self. And so, it feels true and correct that his narrative is fragmented and littered with jagged edges, and that his characters are at once violent and rageful, remorseful and dreamy."--Colin Asher, Washington Independent Review of Books