The Girl with the Leica: Based on the True Story of the Woman Behind the Name Robert Capa (Paperback) 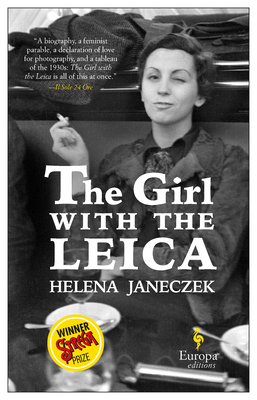 Gerda Taro was a German-Jewish war photographer, anti-fascist activist, artist and innovator who, together with her partner, the Hungarian Endre Friedmann, was one half of the alias Robert Capa, widely considered to be the twentieth century's greatest war and political photographer. She was killed while documenting the Spanish Civil War and tragically became the first female photojournalist to be killed on a battlefield.

August 1, 1937, Paris. Taro's twenty-seventh birthday, and her funeral. Friedmann, who would henceforth assume the moniker Robert Capa alone, leads the procession. He taught Taro to use a Leica. Together, they left for the Spanish Civil War to bear witness to fascist war crimes. He is devastated, but there are others, equally bereft, in the procession: Ruth Cerf, Taro's old friend from Leipzig with whom she fled to Paris; Willy Chardack, ex-lover; Georg Kuritzkes, another lover and a key figure in the International Brigades. They have all known a different Gerda, and one who is at times radically at odds with the heroic anti-fascist figure who is being mourned by the multitudes.

Gerda Taro is at the heart of this kaleidoscopic novel but another of its main characters is the era itself, the 1930s, with economic depression, the rise of Nazism, hostility towards refugees in France, the century's ideological warfare, the cultural ferment, and the ascendency of photography as the age's quintessential art form.

The Girl with the Leica is a must-read for fans of historical fiction centered on extraordinary women's lives.

Born in Munich in a Polish Jewish family, Helena Janeczek has been living in Italy for over thirty years. With The Girl with the Leica she has won the Strega Prize, Italy's most prestigious literary award, and was a finalist for the Campiello Prize. Ann Goldstein has translated into English all of Elena Ferrante's books, including each of the New York Times bestselling installments in Ferrante's Neapolitan quartet, the fourth of which, The Story of the Lost Child, was shortlisted for the MAN Booker International Prize. She has been honored with a Guggenheim Fellowship and is a recipient of the PEN Renato Poggioli Translation Award. She lives in New York.