We Are Family (Paperback) 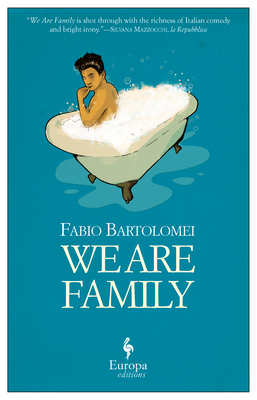 "Zanily inventive . . . This deeply eccentric comedy belongs in the company of the best novels about wildly precocious kids" (The Seattle Times).

Al Santamaria is a child prodigy, maybe a genius. It is not out of the realm of possibility that he, alone, will save the human race. But first, he has to solve a far more urgent problem: finding a home for his family.
He exists, like many kids, in a realm located somewhere between reality and fantasy, enjoying time with imaginary friends and wielding his magical powers. He has a wonderful relationship with his father, Mario Elvis, and his mother, Agnese, and he's convinced he has the best family in the world.
But life isn't all roses for the Santamaria family. They are typical of many Italian families today, whose existences seem suspended between conflicting impulses: on the one hand, delusions of grandeur and immoderate ambition, and on the other nostalgia for a past golden age and the secret wish that somebody, anybody, will come to their rescue. Big dreams, it appears, exist to be crushed.
But Al is not about to give up. He lives in a marvelous world of his own. He has the energy, imagination, and unselfconscious talents of a child. And, although he doesn't know it yet, he is going to remain a child his entire life. "An extended, guffaw-inducing, and sometimes tragic trip through Al's young life. It reads like an Italian sitcom."--Foreword Reviews "An amazing novel: it'll move you and make you laugh."--Elle "A plot shot through with the richness of Italian comedy and bright irony."--La Repubblica

Fabio Bartolomei was born and lives in Rome. He's a writer and screenwriter. His first novel, Alfa Romeo 1300 and Other Miracles (Europa, 2012), and later made into the film Noi e la Giulia. In 2013 he won the Gran Premio delle Lettrici di Elle for We Are Family. His other novels are La Banda Degli Invisibili (2012) and Lezioni in Paradiso (2014). He teaches creative writing. Antony Shugaar's translations for Europa Editions include For Grace Received by Valeria Parrella, Everybody's Right by Paolo Sorrentino, Fabio Bartolomei's Alfa Romeo 1300 and Other Miracles, and Margherita Dolce Vita by Stefano Benni.