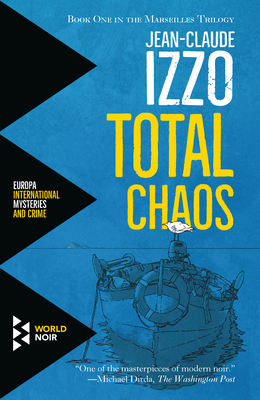 By Jean-Claude Izzo, Howard Curtis (Translator)
$17.00
On Our Shelves Now - Please allow up to 48-hours for Curbside Pickup orders to be processed.

An ex-cop takes on the mafia in the blockbuster novel that kicks off the Marseilles trilogy with what "may be the most lyrical hard-boiled writing yet" (The Nation).

In Jean-Claude Izzo's "Mediterranean noir" mysteries, the city of Marseilles is explosive, breathtakingly beautiful, and deadly. Total Chaos introduces readers to Fabio Montale, a disenchanted cop who turns his back on a police force marred by corruption and racism and, in the name of friendship, takes the fight against the mafia into his own hands. Ugo, Manu, and Fabio grew up together on the mean streets of Marseilles where friendship means everything. They promised to stay true to one another and swore that nothing would break their bond. But people and circumstances change. Ugo and Manu have been drawn into the criminal underworld of Europe's toughest and most violent city. When Manu is murdered and Ugo returns from abroad to avenge his friend's death, only to be killed himself, it is left to the third in this trio, Det. Fabio Montale, to ensure justice is done. Despite warnings from both his colleagues in law enforcement and his acquaintances in the underworld, Montale cannot forget the promise he once made Manu and Ugo. He's going to find their killer no matter the consequences. "One of the masterpieces of modern noir."--The Washington Post "Like the best noir writers--and make no mistake, he is among the best--Izzo not only has a keen eye for detail . . . but also digs deep into what makes men weep."--Time Out New York "The holy grail of noir fiction . . . a fast paced and stylishly told modern tragedy."--NB Magazine

Jean-Claude Izzo was born in Marseilles in 1945. Best known for the Marseilles trilogy (Total Chaos, Chourmo, Solea), Izzo is also the author of The Lost Sailors, and A Sun for the Dying. Izzo is widely credited with being the founder of the modern Mediterranean noir movement. He died in 2000 at the age of fifty-five.