The Athenian Women: A Novel (Paperback) 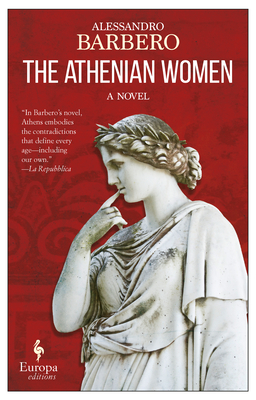 The Athenian Women presents a powerful vision of class struggle, the subjugation of women under a patriarchal system, and the courage needed to change the course of history.

Athens, 411 BC. In the countryside, Trasillo and Polemone, two veterans of the infamous battle of Mantinea, now live in adjacent cottages as humble farmers. They are determined to improve their lot by finding influential husbands for their daughters, Glicera and Charis. However, sensing that a violent political scheme is secretly afoot, the two friends agree that first they must defend Athens from oligarchs who are plotting to reinstate tyrannical rule.

Charis and Glicera are convinced their fathers are being paranoid and, impatient, set about finding suitors themselves. Cimone, the rich and arrogant son of their neighbor Eubulo, soon becomes the object of their desire. When the men travel to Athens to see Aristophanes’ latest comedy, the girls, far from their fathers’ watchful eyes, break social order and accept an invitation to Cimone’s house.

While this romantic drama plays out in the countryside, from the stage, the Athenian Lysistrata and the Spartan Lampito raise their voices in protest against misogyny and war, calling into question the status quo that Athenians have accepted for centuries.

Alessandro Barbero captures an Athens that feels extraordinarily contemporary, where citizens concerned about their freedoms choose to act and create change.

Alessandro Barbero is the author of The Battle: A New History of Waterloo (Walker & Co., 2005), and Charlamagne: Father of a Continent, and Master Pyle's Bella Vita and Other People's Wars, winner of the Strega Prize for Fiction, and The Eyes of Venice (Europa Editions, 2012). He is a renowned historian whose two-volume history of the Battle of Lepanto is considered to be the definitive text on the subject. He teaches Medieval History at the University of Eastern Piedmont in Vercelli, Italy.

Praise for The Athenian Women and Alessandro Barbero

"The Athenian Women is a raw and compelling portrait of 411 BC Greece in which women must fight for justice and democracy in the face of oligarchy."
—La Stampa

"[In The Athenian Women] Athens becomes the model of the contradictions that define every age–including this one...."
—La Repubblica

“Quite simply an extraordinarily beautiful book.”—WUZ on The Eyes of Venice

"This book is a true gem...The Eyes of Venice will transport you to a place and time like no other."
—Historical Novels Review

“A love story, a war story, a story of hope, a story about encountering the Muslim world. in short, an adventure story.”—Panorama on The Eyes of Venice

"Unexpected twists and remarkable encounters, all in the best tradition of dramatic storytelling. With one extra ingredient: intelligent--it might be more accurate to say 'perfect' reconstruction of the historical setting."
—Corriere della Sera