The Prank of the Good Little Virgin of Via Ormea (Paperback) 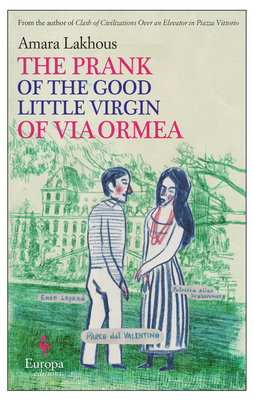 A fun and farcical novel, this new "whodunit" about life in multicultural Italy by Amara Lakhous will delight fans of Lakhous' earlier bestseller, Clash of Civilizations Over an Elevator in Piazza Vittorio, and readers of novels such as The Yacoubian Building by Alaa Al Aswany.

Bittersweet, like any self-respecting Italian comedy, The Prank is a Pirandellian exploration of identity in today's multicultural, polyglot societies. Lakhous draws inspiration from everyday reality, describing his approach to writing as "total literature," a term he has adapted from soccer's "total football." He plays in attack, describing in this work the realities of an Italy of the future with colorful characters portrayed in limpid but lively prose.

Amara Lakhous was born in Algiers in 1970. He has a degree in philosophy from the University of Algiers and another in cultrual anthropology from the University la Sapienza, Rome. Clash of Civilizations Over an Elevator in Piazza Vittorio (Europa Editions, 2008) was awarded Italy's prestigious Flaiano Prize and was described by the Seattle Times as a "wonderfully offbeat novel."

"French and British literatures have long been enriched by the biculturalism of authors like Tahar Ben Jelloun, Amin Maalouf, Gaitam Malkani, and Monica Ali. With talented new writers like Lakhous, Italy is closing the gap."
—The New York Times

"As a novelist of culture clash, Lakhous has the faculty to maintain colorful voices with the luxury of introducing political themes as instantiations of character."
—Bookforum