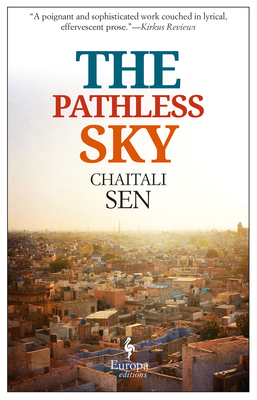 In The Pathless Sky, Chaitali Sen conjures a world in which a nation’s political turmoil, its secret history and growing social unrest turn life into a fragile and capricious thing and love into a necessary refuge to be defended at all cost. A world not unlike the one we live in.

John, a hapless young student with a potentially brilliant academic career ahead of him, and Mariam, a shy, preternaturally perceptive woman from the north, meet and fall in love in college. Their early careers, their seemingly mismatched natures, and the alarming changes occurring in their country conspire to keep them apart for years. But a day comes when, across a great distance, both realize that they have always loved each other.

During the intervening years, however, the troubles in their country have reached a critical impasse. Government crimes have been white washed, personal liberty is deeply compromised, a resistance movement has emerged from the underground to take the fight for freedom to the streets, and the government militia employs increasingly draconian measures in an attempt to maintain control. When Mariam is implicated in the latest spell of anti-government actions and arrested without appeal, the consequences of her and John’s love will prove potentially dire for both.

The Pathless Sky is a haunting and moving novel for readers of Michael Ondaatje’s The English Patient, Jhumpa Lahiri’s The Lowland, and the novels of Amitav Ghosh. Sen’s lyrical language and fluid storytelling mirror the rhythms of political struggle itself. John and Mariam are unforgettable characters, troubled lovers who struggle to find a space for the finest human emotions in a place that is determined to abolish them.

Chaitali Sen came to the U.S. from India when she was two years old. She grew up in the Northeast, received an MFA from Hunter College, and now lives in Austin, Texas. Her short stories have been published in the Colorado Review, the New England Review, Juked, and many other journals. In 2014, she was the recipient of a Tennessee Williams Scholarship at Sewanee Writers' Conference.

"This debut novel is a searingly vivid portrayal of the depths of human emotions [. . .] A poignant and sophisticated work couched in lyrical, effervescent prose. " — Kirkus Reviews