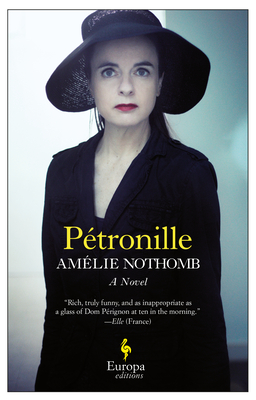 By Amelie Nothomb, Alison Anderson (Translated by)
$15.00
Unavailable, Out of Stock, or Out of Print

Amélie Nothomb is one of Europe's most successful and talked about authors. Hygeine and the Assassin, her first published novel, became a phenomenon, occupying a unique position in the world of French and international fiction. Delightful and witty, Pétronille is further proof of Nothomb's versatility and brilliance.

With wry humor and a deceptively simple style, Pétronille tells an unusual story about twin abiding passions: one for champagne, and the other for a riotous friendship between her protagonist and Pétronille Fanto, a woman who refuses to drink alone.

This is a funny, moving, "exotic" novel about travel, France, champagne, and, above all, about women's friendship. The on-again/off-again friendship between Pétronille and the main character in the book, who happens to be a writer by the name of Amélie Nothomb, gives the story its verve and the novel its heart. This is literary Thelma & Louise, with a little bit of French panache and a whole lot of champagne thrown in.

Amélie Nothomb was born in Japan of Belgian parents in 1967. She lives in Paris. Since her debut on the French literary scene, she has published a novel a year, every year. Her edgy fiction, unconventional thinking, and public persona have combined to transform her into a worldwide literary sensation. Her books have been translated into over twenty-five languages and been awarded numerous prizes including the French Academy's 1999 Grand Prix for the Novel, the René-Fallet prize, the Alain-Fournier prize and the Grand Prix Giono in 2008.

"Amélie Nothomb is such an utter astonishment, the shock of reading her for the first time is like realising you have missed a whole movement, or a century, in the scheme of things."
—Scotland on Sunday

"Read Amélie Nothomb! It's a bit like opening a bag full of surprises."
—Le Globe-Lecteur

"Nothomb's Life Form fuses the sincere with the subversive to tell a story as winning as it is perverse."
—The Seattle Times

"Nothomb's prose has a hard-edged clarity and a slyness to it."
—The Los Angeles Times