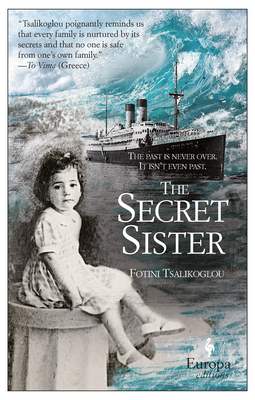 The past isn’t over. It isn’t even past. For Jonathan, a third generation Greek American who has never set foot in his ancestral homeland, a journey to crisis-ridden contemporary Greece will unleash a century of buried family secrets.

From the burning quay at Smyrna to present day Manhattan, the Argyriou family has been pursued by disaster. In the 1922 Greco-Turkish War, little Frosso and her sister Erasmia flee as Turkish soldiers descend on their village. Orphaned and destitute, the two girls have only each other to rely on as they scrape together a life in the immigrant slums around Athens. Eighteen years later, Europe is stewing and Erasmia is offered a chance for a new life in America by her fiancé Menelaos. Compelled to leave by the impending war, Erasmia boards the ship “New Greece” with a heavy heart, but before the ship reaches harbor her grief takes hold and Erasmia throws herself into the ocean. A forlorn Meneloas returns to Greece and marries his beloved’s younger sister, Frosso, and the couple eventually settles in New York. They bestow on their only daughter the haunted name of her departed aunt but the burden of family history ultimately destroys Frosso and compels her son Jonathan to uncover the shadowy history of the Argyriou family.

Fotini Tsalikoglou’s poetic, atmospheric novel explores the blurred line between history and memory. Psychologically complex and deeply moving, The Secret Sister is a brilliant mediation on the irrepressible need for people to tell stories.

Born in Athens, Greece, Fotini Tsalikoglou studied psychology at the University of Geneva.  She is the author of many celebrated novels published in Greece, including Eros Pharmakopoios, I Dreamed I Was Well, and I, Martha Freud. Tsalikoglou is currently a professor of psychology at Panteion University in Athens and a regular contributor to the Athens daily To Vima. The Secret Sister is her English language debut.

"A hauntingly poignant look at the secret lives and memories of those with whom we consider ourselves closest and the ways in which places can be defined for generations by the secrets we keep and the truths we reveal." — World Literature Today