The Brotherhood of Book Hunters (Paperback) 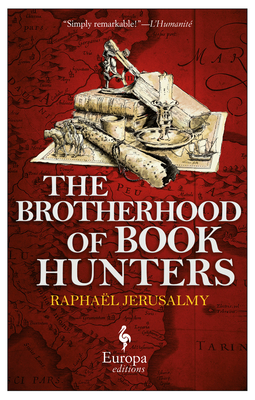 The Da Vinci Code meets Stephen Greenblatt's The Swerve in this erudite adventure story set at the dawn of the printed book about the outlaw poet François Villon and the power of words to change the world.

François Villon, the world's first poet of modernity, was born in Paris in 1431. He was arrested and condemned to death by hanging in 1462 and exonerated in 1463. Shortly after his release from prison, as far as history is concerned, he disappeared forever.

In Raphaël Jerusalmy's thrilling novel, to ensure his release, Villon has accepted a shady deal offered by the Bishop of Paris at the behest of Louis XI. All Villon has to do to earn his freedom is to convince a printer and bookseller to move from Mayence to Paris, telling him that by doing so he'll be better able to circulate progressive ideas that aren't approved of in Rome. Not surprisingly, Villon's task becomes more complicated that it first seemed. With this riveting tale of plots and counterplots involving secret organizations in Jerusalem, intrigue in France, and brigands in Italy, Raphaël Jerusalmy leaves readers with their hearts racing and their imaginations stirred. The Brotherhood of Book Hunters is an irresistible read for lovers of books, adventure, and fine writing.

Raphaël Jerusalmy was born in Montmartre, France in 1954. After receiving diplomas from the École Normale Supérieure and the Sorbonne, he worked with Israeli Military Intelligrance. His previous novel, Saving Mozart (Europa Editions, 2013) was selected as a B&N Holiday Discover Pick. He currently sells antique books in Tel-Aviv.

Praise for The Brotherhood of Book Hunters

"In this intriguing game of shadows, Jerusalmy sketches a second life for François Villon, a political-religious adventure that is full of twists and turns, and bloody Machiavellian plots in the style of Umberto Eco and Dan Brown."
—Laurence Cossé, author of A Novel Bookstore

“A strong novel of thrilling adventures, full of energy, of malice, of insolence, and of scholarship... The journey is epic.”
—L’Express

"The Brotherhood of Book Hunters is a scholarly text and at the same time a crime novel with bountiful, often very funny prose. In short, this is an inventive and exciting novel."
—La Lettrine

"This slender, confident debut novel is deliciously atmospheric and tense."
—The Financial Times

"Saving Mozart read like an unexpected gift."
—The Big Issue