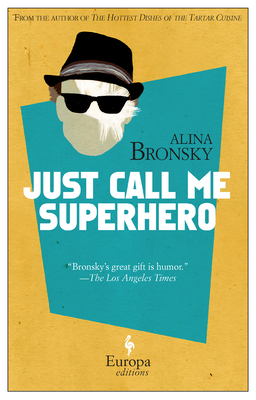 By Alina Bronsky, Tim Mohr (Translated by)
This Book Is Not Sold Online - Inquire In Store
Not In Stock/Special Order

An atmospheric evocation of modern Berlin, a vivid portrait of youth under pressure, and a moving story about learning to love, this new novel from the author of Broken Glass Park is an irreverent look at the sometimes difficult work of self-acceptance.

Badly disfigured as a result of an encounter with a dog, seventeen-year-old Marek begins attending a support group for young people with physical disabilities, which he dubs “the cripple group,” led by an eccentric older man only known as The Guru. Marek is dismissive of the other members of the support group, seeing little connection between their misfortunes and his own. The one exception to this is Janne, the beautiful wheelchair-bound woman with whom he has fallen in love. When a family crisis forces Marek to face his demons, with or without the group, he finds himself in dire need of support. But the distance he has put between himself and The Guru’s misshapen acolytes may well be too great to bridge.

Just Call Me Superhero cements Alina Bronsky’s reputation as one of her generation’s most compelling and stylish young authors.

Alina Bronsky's first book, Broken Glass Park, was described as "the most astonishing debut in years" by the German daily, Nürnberger Nachrichten, and as "riveting debut" by Publishers Weekly (starred review). Her second book, The Hottest Dishes of the Tartar Cuisine, was named a Favorite Read of the Year by both the Huffington Post and The Wall Street Journal, and a Best Book of the Year by Publishers Weekly. Bronsky's writing is "potent and vital" said the Financial Times and The Daily Beast wrote that sie is "an exciting new voice in the literary world." Born in Russia, Bronsky now lives in Berlin with her family.

In addition to having translated Alina Bronsky's previous novels, Tim Mohr has translated such authors as Wolfgang Herrndorf, Stefanie de Velasco, and Charlotte Roche. He has also collaborated on memoirs by musicians Paul Stanley, Gil Scott-Heron, and Duff McKagan. His own writing has appeared in the New York Times, The Daily Beast, and Playboy, among other publications. Prior to starting his writing career he earned his living as a club DJ in Berlin, Germany.

Praise for Just Call Me Superhero

"Russian-born writer Alina Bronsky (Broken Glass Park) has a gift for transforming an awkward moment into a jewel of revelation that makes her story rich in genuine character comedy."
—Shelf Awareness

"A masterful study in delusion."
—The Financial Times

“[Rosa from The Hottest Dishes of the Tartar Cuisine is] one of the most fascinating women in the world.”
—The Millions

"What begins as a cruel comic romp ends as a surprisingly winning story of hardship and resilience."
—The New Yorker

“I plan to . . . read whatever comes next from this important new literary voice.”
—Ms. Magazine