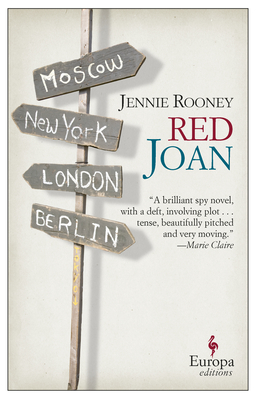 Inspired by the true story of Melita Norwood, a woman unmasked in 1999, at age 87, as the KGB's longest-serving British spy, Red Joan centers on the deeply conflicted life of a brilliant young physicist during the Second World War.

As nations throughout the continent fall to fascism, Joan is enlisted into an urgent project that will change the course of the war—and the world—forever. Risking both career and conscience, leaking information to the Soviets, but struggling to maintain her own semblance of morality, Joan is caught at a crossroads in which all paths lead to the same end-game: the deployment of the atomic bomb.

Life during wartime, however, is often ambiguous, and when—decades later—MI5 agents appear at her doorstep, Joan must reaffirm the cost of the choices she made and face the cold truth: our deepest secrets have a way of dragging down those we love the most.

Jennie Rooney was born in Liverpool in 1980. She studied history at the University of Cambridge and taught English in France before moving to London to work as an attorney. Her first novel, Inside the Whale, was shortlisted for the Costa First Novel Award.

"A page-turning saga of spies, conflicted loyalty, and the grave consequences of good intentions."
—Publishers Weekly

"Rooney has created a wonderful narrative structure [that] elegantly presents a woman who was living a 'calm and contented existence' when MI5 came knocking on her door."
—Kirkus

"Rooney wonderfully evokes not only the political consciousness of the time but also the exhilaration — and the terror — of being young and risking everything...A drama of love, idealism, and betrayal that is as moving as it is thrilling."
—Barnes & Noble Review

"Rooney's re-creation of the politics of the day is brilliant."
—The Times

"Red Joan's strength lies in the complex personal relationships that underpin the spying game... A powerfully written exploration of the far-reaching consequences that even the smallest-seeming actions can have."
—Literary Review

"This is an infectious page-turner, as crafty and nuanced and impassioned as any classic thriller, but one that doesn't forget where its heart is."
—The National

"Rooney is a novelist at home with life's ambiguities, her plotting pleasingly intricate, her narrative richly textured."
—The Telegraph