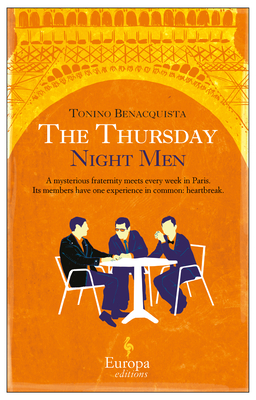 Every Thursday night at 7 o’clock a group of three men meet in Paris. Each man’s life, his story, his situation, is as different from the others’ as can be. What unites them is heartache. Trouble, that is, with women. The meetings are held in a spirit of openness and tolerance. In an almost religious silence each man confesses while the others listen. Philippe is a philosopher of repute. Since the woman he considered to be his perfect mate left him, he has been dating one of the world’s most famous models in an effort to forget. Denis has been working as a waiter for years. Women have lost interest in him entirely and he is in a deep funk because of it. But one day a mysterious woman with a suitcase appears on his doorstep and moves into his living room without explanation, throwing his life into turmoil. Yves is a husband and a cuckold, who, after having discovered his wife’s betrayal, refuses to honor any and all forms of faithfulness. He is spending a lifetime’s worth of savings in search of pleasure.

In The Thursday Night Men, Benacquista gives his readers a variety of unexpected and amusing perspectives on romance, the relationship between the sexes, and friendship between men.

Tonino Benacquista, born in France in 1961 of Italian immigrants, is an acclaimed and popular author of fiction, film scripts, and graphic novels. He is the author of four works of crime fiction published by Bitter Lemon Press in the US and UK. Benacquista won a Cesar (French Oscar) in 2006 for the script of Jacques Audiard’s The Beat That My Heart Skipped.