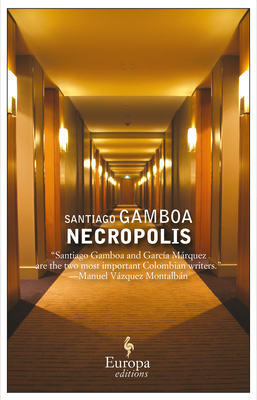 By Santiago Gamboa, Howard Curtis (Translated by)
This Book Is Not Sold Online - Inquire In Store
Hard to Find

Viewed as one of "the most important Colombian writers" (Manuel Vázquez Montalbán) today, Santiago Gamboa showcases throughout his first novel Necropolis the talent and inventiveness that have earned him a reputation as one of the leading figures in his generation of Latin American authors.

Upon recovering from a prolonged illness, an author is invited to a literary gathering in Jerusalem that turns out to be a most unusual affair. In the conference rooms of a luxury hotel, as war rages outside, he listens to a series of extraordinary life stories: the saga of a chess-playing duo, the tale of an Italian porn star with a socialist agenda, the drama of a Colombian industrialist who has been waging a longstanding battle with local paramilitaries, and many more. But it is José Maturana—evangelical pastor, recovering drug addict, ex-con—with his story of redemption at the hands of a charismatic tattooed messiah from Miami, Florida, who fascinates the author more than any other. Maturana's language is potent and vital, and his story captivating.

Hours after his stirring presentation to a rapt audience, however, Maturana is found dead in his hotel room. At first it seems likely that Maturana has taken his own life. But there are a few loose ends that don't support the suicide hypothesis, and the author-invitee, moved by Maturana's life story to discover the truth about his death, will lead a search that drives the entire plot of this chimerical novel beyond the action-filled investigation and to a thought that resonates universally.

Novelist, short story writer, and journalist, Santiago Gamboa was born in Colombia in 1965. His American debut, published by Europa in 2012, was the novel Necropolis, winner of the Otra Orilla Literary Prize. He is also the author of Night Prayers (Europa Editions, 2016).

For Europa Editions, Howard Curtis has translated five novels by Jean-Claude Izzo, including all three books in his Marseilles trilogy, as well as fiction by Francisco Coloane, Canek Sanchez Guevara, Caryl Férey, and two previous books by Santiago Gamboa.

"Gamboa is one of the most interesting Latin American writers...[and Necropolis] is his most ambitious novel yet."
—La Nación

"[Necropolis exhibits a] magnificent use of language, accomplishing the difficult task of bringing so many different voices to life whilst making each one authentic and unique."
—La Otra Orilla Jury