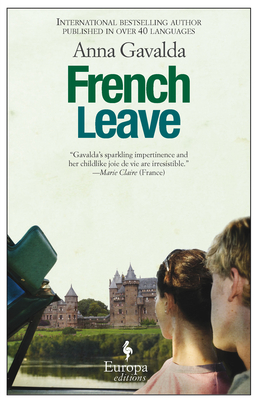 By Anna Gavalda, Alison Anderson (Translated by)
This Book Is Not Sold Online - Inquire In Store
Out of Print

A bestselling novel in Europe with over half a million copies sold, published in over twenty-six languages, Anna Gavalda's French Leave is a charming adventure that tells the story of four siblings in search of the happiness they knew as children and the bonds that once united them.

Simon, Garance and Lola flee a dull family wedding (and Simon's uptight and judgemental wife) to visit their younger brother, Vincent, who is working as a guide at a château in the heart of the enchanting Tours countryside. For a few hours, they forget about kids, spouses, work, and the many demands adulthood makes upon them and lose themselves in a day of laughter, teasing, and memories. As simply and as spontaneously as the adventure began, it ends. All four return to their everyday lives, carrying with them the magic of their brief reunion. They are stronger now, and happier, for having rediscovered the ties that bind them.

Lighthearted, tender and funny, a parable on escaping the past to find the future, French Leave is a tribute to sibling relationships, local Loire wines, and the art of being together.

Born in Paris in 1970, Anna Gavalda’s first published work was the critically acclaimed collection of short stories I Wish Someone Were Waiting for Me Somewhere, which sold over half a million copies in her native France and was published in the US by Riverhead in 2003. She is also the author of Someone I Loved and the international bestseller Hunting and Gathering (Riverhead, 2007), which was made into a film starring Audrey Tautou and Daniel Auteuil. Gavalda lives in Paris. Alison Anderson's translations for Europa Editions include novels by Sélim Nassib, Amélie Nothomb, and Eric-Emmanuel Schmitt. She is the translator of The Elegance of the Hedgehog (Europa, 2008) and The Life of the Elves (Europa, 2016) by Muriel Barbery.

"[Like Anne Tyler and Nick Hornby] Anna Gavalda has the ability to create intelligent dramas with a witty sideline in banter-driven dialogue...Her stock in trade is the endearing oddball. Her characters' peccadilloes drive the narrative engine as much as plot delivery. Conversation turns towards the manic passions of obsessives."
—The Independent (UK)

"[French Leave is] a slight novel with great—and eventually moving—insights into the dynamics of family life."
—Kirkus Reviews

"The most discreet of bestselling authors, with French Leave, Gavalda once again demonstrates her delightful uniqueness and buoyancy. Infinitley charming with dialogue that sparkles like fire."
—Madame Figaro

"A comedy of happiness that will delight readers."
—La Croix