Vancouver's Discovery of Puget Sound: Portraits and Biographies of the Men Honored in the Naming of Geographic Features of Northwestern America (Paperback) 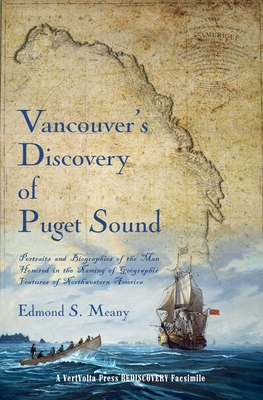 The geographic names on the Atlantic seaboard were in use for more than a century before the war of the American Revolution was fought.

Just as that war was beginning the first Spanish caravels crept northward from New Spain toward the fabled Straits of Anian. After the war was ended the wild coasts along the Pacific were a lure for the explorer and the fur trader. Voyages of this kind increased, breeding disputes over sovereignty, which culminated in Great Britain's geographic and diplomatic expedition of 1792.The commanding officer, Captain George Vancouver of the Royal Navy, was the friend and acquaintance of many men who had taken part for their country in the disputes and the war with the American colonies. It was perfectly natural that he should compliment those men as he discovered or rediscovered places that needed naming. An explorer of the same nationality, but of an earlier or a later period, would, of course, have given us a different set of names famous in British history.The American who loves the history of his country is usually broad enough to love also the great achievements of his kin beyond the seas. He therefore not only tolerates but actually grows fond of such names as Hood, Howe, Rainier, Puget, and Vancouver, as applied to the geography of the northwest. from the Introduction.