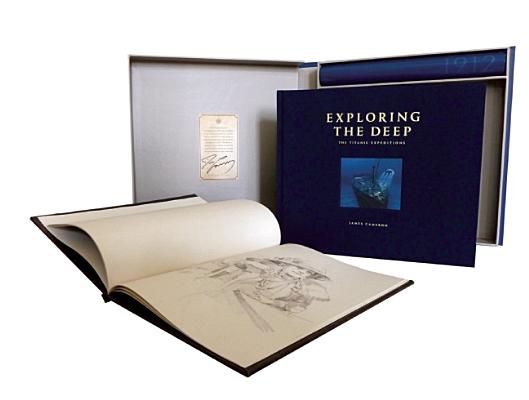 By James Cameron, Don Lynch (With), Ken Marschall (With)
$395.00
Unavailable, Out of Stock, or Out of Print

Having undertaken more than thirty dives to the wreck of the "Titanic," acclaimed director James Cameron has probably gained more first-hand insight into the sinking of the ship than any person alive today. Now, more than one hundred years after the tragedy, "Exploring the Deep" provides a thrilling account of his remarkable expeditions and the incredible technological innovations that made them possible. Capturing all the excitement, danger, and wonder of these pioneering expeditions, "Exploring the Deep" also examines the legacy of Cameron's explorations and the considerable impact they have made on our understanding of the disaster.
This deluxe collectors edition of "Exploring the Deep" features several exclusive items:
A card of authenticity signed by James Cameron.
A replica of the sketchbook Leonardo DiCaprio's character uses in the movie "Titanic" containing never-before-seen artwork created for the film by James Cameron.
A signed print featuring acclaimed "Titanic" illustrator Ken Marschall's artwork.
The book itself features a cover exclusive to this edition and is presented alongside these exclusive items in a high-quality clamshell case.

James Cameron is an Oscar(r)-winning film director and celebrated explorer. The visionary behind record-setting blockbuster movies such as "Titanic, Avatar," and "Terminator 2: Judgment Day," Cameron s passion for diving and exploration has led him to embark on a number of trailblazing deep-sea expeditions, including more than thirty dives to "Titanic." Cameron made history when he undertook the first-ever solo dive to the Mariana Trench in 2012.

Don Lynch has researched Titanic and her passengers and crew for four decades. Official historian for the Titanic Historical Society, Inc., he authored the books "Ghosts of the Abyss" and the "New York Times" best seller "Titanic: An Illustrated History." Lynch was the chief historical advisor for James Cameron s blockbuster movie Titanic and has participated in two of Cameron s expeditions, diving to the wreck twice.

Ken Marschall is a renowned artist who has been painting "Titanic" since he was sixteen. Since then, his vast familiarity with the ship s structural details has led to involvement in numerous Titanic projects, from model kits to motion pictures and the illustration of many books. The visual historian for James Cameron s "Titanic movie," Ken later accompanied the director on two "Titanic" expeditions and dived to the wreck six times.

Parks Stephenson first worked with James Cameron during the filming of "Ghosts of the Abyss" in 2002, studying the underwater footage and creating the first-ever accurate computer-generated imagery of "Titanic s" Marconi and Silent rooms. He also joined Cameron s 2005 expedition for the Discovery Channel program "Last Mysteries of the Titanic" and made his first dive to the wreck."