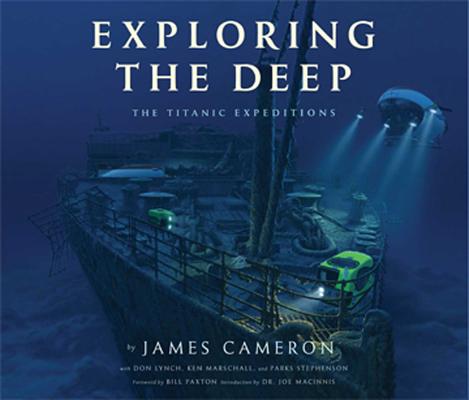 By James Cameron, Don Lynch (With), Ken Marschall (With)
$55.00
Unavailable, Out of Stock, or Out of Print

Having undertaken more than thirty dives to the wreck of Titanic, acclaimed director James Cameron has probably gained more firsthand insight into the sinking of the ship than any person alive today. Now, more than one hundred years after the tragedy, Exploring the Deep provides a thrilling account of his remarkable expeditions and the incredible technological innovations that made them possible. Capturing all the excitement, danger, and wonder of these pioneering expeditions, Exploring the Deep also examines the legacy of Cameron's explorations and the considerable impact they have made on our understanding of the disaster. Showcasing a treasure trove of never-before-seen images captured inside previously unreachable areas of the wreck, is a dazzling visual chronicle of Cameron's expeditions that will enthrall experts and casual readers alike. Also featuring Cameron's exclusive dive journal and previously unpublished visual elements, including dive maps and personal photographs, this book is an emotional and evocative examination of the wreck from one of the most exciting figures in both filmmaking and exploration. Bolstered by contributors from three of the world's foremost Titanic experts, Don Lynch, Ken Marschall, and Parks Stephenson, Exploring the Deep is the definitive book on Cameron's expeditions and the last word on a historical event that continues to shock and beguile.

James Cameron’s attention to realism and detail is legendary. Celebrated for such uncompromising action-adventure films as The Terminator, Aliens, True Lies, and Avatar, the writer-director actually vowed not to make Titanic unless he could successfully dive to the wreck himself and bring back motion picture footage for use in the film. Representing years of Cameron’s passion and dedication, Titanic is one of the filmmaker’s most ambitious films.

Don Lynch has researched Titanic and her passengers and crew for four decades. Official historian for the Titanic Historical Society, Inc., he authored the books Ghosts of the Abyss and the New York Times best seller Titanic: An Illustrated History. Lynch was the chief historical advisor for James Cameron’s blockbuster movie, Titanic, and has participated in two of Cameron’s expeditions, diving to the wreck twice. He lives in Los Angeles.

Ken Marschall is a renowned artist who has been painting Titanic since he was sixteen. Since then, his vast familiarity with the ship's structural details has led to involvement in numerous Titanic projects, from model kits to motion pictures and the illustration of many books. The visual historian for James Cameron's Titanic movie. Ken later accompanied the director on two Titanic expeditions and dived to the wreck six times. He lives in Southern California.