Romance of the Grail: The Magic and Mystery of Arthurian Myth (Paperback) 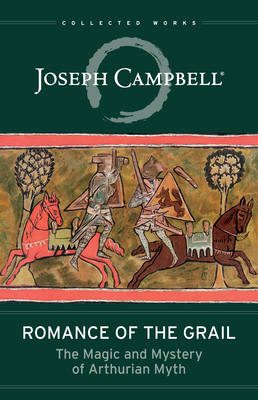 The first collection of Joseph Campbell's writings and lectures on the Arthurian romances of the Middle Ages, a central focus of his celebrated scholarship, now in paperback Throughout his life, Joseph Campbell was deeply engaged in the study of the Grail Quests and Arthurian legends of the European Middle Ages. In this new paperback volume of the Collected Works of Joseph Campbell, editor Evans Lansing Smith collects Campbell's writings and lectures on Arthurian legends, including his never-before-published master's thesis on Arthurian myth, "A Study of the Dolorous Stroke." Campbell's writing captures the incredible stories of such figures as Merlin, Gawain, and Guinevere as well as the larger patterns and meanings revealed in these myths. Merlin's death and Arthur receiving Excalibur from the Lady of the Lake, for example, are not just vibrant stories but also central to the mythologist's thinking. The Arthurian myths opened the world of comparative mythology to Campbell, turning his attention to the Near and Far Eastern roots of myth. Calling the Arthurian romances the world's first "secular mythology," Campbell found metaphors in them for human stages of growth, development, and psychology. The myths exemplify the kind of love Campbell called amor, in which individuals become more fully themselves through connection. Campbell's infectious delight in his discoveries makes this volume essential for anyone intrigued by the stories we tell--and the stories behind them.

Joseph Campbell is widely credited with bringing mythology to a mass audience. His works, including The Hero with a Thousand Faces, the four-volume The Masks of God, and The Power of Myth (with Bill Moyers), rank among the classics in mythology and literature. JCF.org