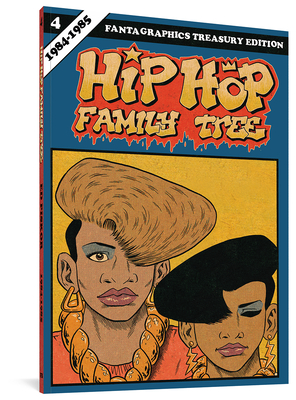 In the latest volume of the history of hip-hop told in graphic novel form, we are introduced to characters such as Dr. Dre, Will Smith, Salt-N-Peppa (some of whom were featured in the hit summer movie, Straight Out of Compton), and many more.

Book 4 charts the rise of Dr. Dre and Def Jam records, and introduces new branches on the "tree": Will Smith, Salt-N-Pepa, Rakim, and Biz Markie. This volume is also jam-packed with films Hollywood released in an attempt to cash in on the phenomenon, like Breakin’, Breakin’ 2 Electric Boogaloo, Beat Street, Krush Groove and more.

Ed Piskor is the New York Times bestselling creator of Hip Hop Family Tree and X-Men: Grand Design as well as the co-conspirator behind the YouTube channel sensation, Cartoonist Kayfabe. He lives in Pittsburgh, PA.

Piskor’s ongoing series of oversize albums detailing the history of hip-hop is one of the very best things about contemporary comics-making.
— Austin 360

In the fourth helping of Piskor's chronology of his passion, covering 1984-85, Philadelphia is the scene as often a NYC and LA, and the impact on pop culture of Philly's explosive suppression of the African American MOVE commune is explained via flashback.
— Ray Olson - Booklist

Piskor's innovative use of color makes things crackle and sputter. He sampled old comic-book pages for most of his color fills, but when he draws an event that took place after 1984-85, he dumps in flat color and bright inks. These panels seem to bounce off the page and emphasize the hazy nostalgia of the rest of the art. If his ingenuity here is any indication, the twists — and the hits — will just keep coming.
— NPR

For the uninitiated, this is not some dry distillation of facts and dates via narrative. Mr. Piskor’s storytelling uses the same engaging, pointillist method seen in the prior three volumes: Connecting the many, very human dots that put a relatively small group of street and club DJs and MCs at the forefront of the creation of one of the most important musical forms of the past century. If he were merely a historian writing about such a vital period, it would be enticing enough. Scouring books, blogs, podcasts, Youtube and anything else to pinpoint hundreds of moments of time for each volume, the legwork Mr. Piskor puts into accurately presenting this history is legendary. But at his core, Mr. Piskor is a powerful visual artist. The style he established in the very first volume continues to grab the viewer. He exaggerates just the right parts of his chosen characters with a technique that intentionally celebrates both the Marvel Comics’ artists of the 1970s, as well as one of Mr.Piskor’s idols, underground comic artist R. Crumb.
— Pittsburgh Post-Gazette