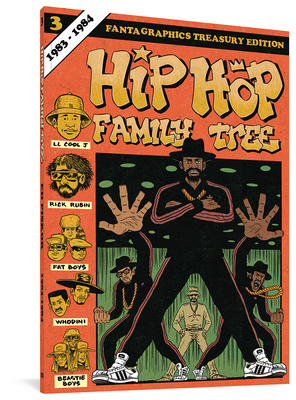 The third volume of the popular webcomic tells the true story of hip-hoppers The Beastie Boys, Run DMC, The Fat Boys, and many more.

Ed Piskor is the New York Times bestselling creator of Hip Hop Family Tree and X-Men: Grand Design as well as the co-conspirator behind the YouTube channel sensation, Cartoonist Kayfabe. He lives in Pittsburgh, PA.

The third gathering of Piskor’s smash webcomic... affords as much amusement and well-researched history as its two predecessors. ... Piskor’s art style, somewhere between Jack Kirby and R. Crumb, looks as good as, maybe better than, ever.
— Ray Olson - Booklist

The amount of research he’s done sets a rather terrifying new standard for anyone else inclined to study the birth of hip-hop…. No less brilliant than Piskor’s journalism is his graphical skill.
— Etelka Lehoczky - NPR Books

When cartoonist Ed Piskor decided to unspool the labyrinth history of one of America’s greatest artistic accomplishments, he spared no effort to immerse his readers in the era of jump suits and scarred vinyl. Everything in Hip Hop Family Tree screams nostalgia: the Ben-Day dots, the sepia discoloration…even the print feels course and pulpy, like a priceless cultural artifact unearthed in a garage sale or your dad’s basement. Flipping through the oversized pages, you can almost hear the slap bass, horn swells, and ricocheting rhymes of hip-hop’s inaugural years.

The cartoonist’s encyclopedic love for his subject matter – and his energetic depiction of its beefs, battle-raps and gradual rags-to-riches rise to fame – makes Hip Hop Family Tree a rigorous, scholarly work of pop culture history, masquerading as great comics.

— Sean Rogers - The Globe and Mail

Pittsburgh cartoonist Piskor continues his authoritative and highly entertaining graphic history of hip-hop, with tales of the early days of Run-DMC, the Beastie Boys, and the Fat Boys.
— Dan DeLuca - The Inquirer (Philadelphia)

Comic book writer and illustrator Ed Piskor is working to preserve a sense of hip-hop’s early history through the widely acclaimed Hip-Hop Family Tree comic series from Fantagraphics, an expansive look at the early ’80s formative hip-hop scene and the young pioneers that poured the foundation.

Piskor’s work doesn’t just capture the mood of old school hip hop. It taps into the feel of school comics as well. ... This is the kind of book that’s designed to be spread out on the floor while resting on your belly, the stereo turned up as loud as you can stand it. Piskor’s mastery of the comics page is like a DJ’s best breakbeat record -- no matter where you drop the needle, you’re going to find something good.
— Jeremy Estes - Graphic Novel Reporter

Retelling the history of hip hop in the style of '80s Marvel comics, wasn't necessarily a good idea… it was the best idea. ...HHFT [is] an incredible achievement, as well as one of comics' greatest nonfiction works.

Extraordinary effort. Even if you are not a hip-hop fan, you need to read this.
— Jatin Varma - The Economic Times

Whether you were there when it was happening or not, [Hip Hop Family Tree] will unfold a rich universe of music history and all the knock-on effects of it too. With the warmth and immediacy only a true fan could impart, Piskor tells the ongoing history of Hip Hop in these lovingly crafted volumes.

...[Hip Hop Family Tree] gets better and better as its core cast of characters gets fully established and we get a bit more in-depth with them. ... Piskor’s style and design choices push the quality of this history of hip-hop over the top.