The Colors of the New World: Artists, Materials, and the Creation of the Florentine Codex (Getty Research Institute Council Lecture Series) (Paperback) 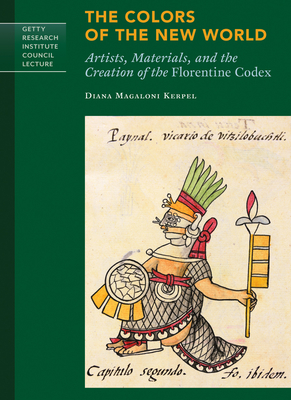 By Kerpel Magaloni Diana
$15.00
Unavailable, Out of Stock, or Out of Print

In August 1576, in the midst of an outbreak of the plague, the Spanish Franciscan friar Bernardino de Sahagún and twenty-two indigenous artists locked themselves inside the school of Santa Cruz de Tlaltelolco in Mexico City with a mission: to create nothing less than the first illustrated encyclopedia of the New World. Today this twelve-volume manuscript is preserved in the Biblioteca Medicea Laurenziana in Florence and is widely known as the Florentine Codex.

A monumental achievement, the Florentine Codex is the single most important artistic and historical document for studying the peoples and cultures of pre-Hispanic and colonial Central Mexico. It reflects both indigenous and Spanish traditions of writing and painting, including parallel columns of text in Spanish and Nahuatl and more than two thousand watercolor illustrations prepared in European and Aztec pictorial styles. This volume reveals the complex meanings inherent in the selection of the pigments used in the manuscript, offering a fascinating look into a previously hidden symbolic language. Drawing on cutting edge approaches in art history, anthropology, and the material sciences, the book sheds new light on one of the world’s great manuscripts—and on a pivotal moment in the early modern Americas.

Diana Magaloni Kerpel is a researcher at the Universidad Nacional Autónoma de México and has served as director of the Museo Nacional de Antropología in Mexico City.

“The 16th-century Florentine Codex is the principal document on the Nahua culture of Mesoamerica, written by Franciscan friar Bernardino de Sahagún in collaboration with native peoples, whose traditions and beliefs were vanishing. Many scholars have addressed the book’s text, but Diana Magaloni Kerpel’s project is unique. She approaches the Codex as a collaborative work of art, exploring the object’s physical attributes and its authorship. The result is a novel interpretation, one that returns autonomy to the indigenous people who helped create the book. Accompanying her thesis are selected reproductions of the 2,486 beautiful illustrations in the Codex, depicting midwifery, the fabrication of feather headdresses, history, myths, and animals.”—ARTnews