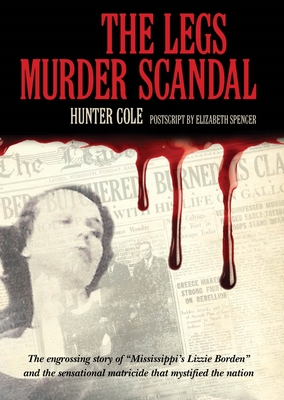 By Hunter Cole
$38.00
Unavailable, Out of Stock, or Out of Print

In Laurel, Mississippi, in 1935, one daughter of a wealthy and troubled family stood accused of murdering her mother. On her testimony, authorities suspected an equally prominent and well-to-do businessman, her reputed lover, of assisting. Ouida Keeton apparently shot her mother, chopped her up, and disposed of most of her body parts down the toilet and in the fireplace, burning all but the pelvic region, the thighs, and the legs. Attempting to dispose of these remains on a narrow, one-lane, isolated road, Ouida left a trail of evidence that ended in her arrest. People had seen her driving to the road. Within hours, a hunter and his dogs found the cloth in which she had wrapped her mother's legs. Touted as the most sensational crime in Mississippi history at the time, the Legs Murder of 1935 is almost entirely forgotten today. The controversial outcome, decided by an unsophisticated jury, has been left muddled by ambiguity. With The Legs Murder Scandal, Hunter Cole presents an intricately detailed description of the separate trials of Ouida Keeton and W. M. Carter. Having researched trial transcripts, courthouse records, medical files, and vast newspaper coverage, the author reveals new facts previously distorted by hearsay, hushed reports, and misinformation. Cole pursues many unanswered questions such as what, really, did Ouida Keeton do with the rest of her mother? The Legs Murder Scandal attempts to provide the reader with clarity in this story, which is outlandish, harrowing, and intriguing, all at once.

Hunter Cole was associate director and marketing manager of the University Press of Mississippi at the time of his retirement in 2003. He has contributed essays to a number of publications about Eudora Welty, and he helped to compile and edit Photographs, UPM's collection of Welty's photographic work.