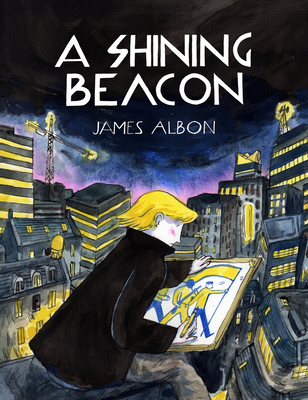 By James Albon
$19.99
Unavailable, Out of Stock, or Out of Print

Pictures at a revolution: acclaimed graphic novelist James Albon (Her Bark and Her Bite) explores the role of the artist in a frighteningly familiar near-future of tyrannical regimes and popular revolts.

Francesca Saxon, artist and loyal citizen of the nation, is thrilled when she receives a commission to design the central mural of an epic new swimming pool: the jewel in the crown for an insecure regime obsessed by propaganda. Leaving the comfort of her coastal hometown for the lap of luxury of the capital, she is swept up in the paranoia of a government threatened by underground revolutionaries, whose promise of a freer, happier future looks increasingly appealing. Torn between rival factions and her personal loyalties, she realises that when ideology has a stranglehold on art, the picture is rarely pretty.

James Albon is a British illustrator living in Lyon, France. His clients include the Folio Society, The Guardian, the Wall Street Journal and WIRED. He studied illustration at Edinburgh College of Art, went on to a postgraduate scholarship at the Royal Drawing School in London, and was awarded the Gwen May award from the Royal Society of Painter-Printmakers in 2012.

“A brilliantly drawn, heart-rending drama of modern life in troubled times, so contemporary that it could be off the streets of any city today.” — Paul Buhle, author of Marxism in the United States