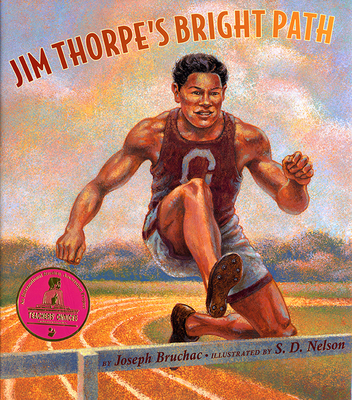 A biography of the legendary Native American Jim Thorpe (1888--1953), voted the Greatest Football Player and Greatest Athlete of the Half-Century by two AP polls, focusing on his early childhood and how school and sports shaped his future.

From the day he was born, Jim Thorpe's parents knew he was special. As the light shone on the road to the family's cabin, his mother gave Jim another name - Wa-tho-huck - Bright Path.

Jim's athletic skills were evident early on, as he played outdoors and hunted with his father and twin brother. When the boys were sent to Indian boarding school, Jim struggled in academics but excelled in sports. Jim moved from school to school over the years, overcoming family tragedies, until his athletic genius was recognized by Coach Pop Warner at the Carlisle Indian School.

From the award-winning team of Joseph Bruchac and S. D. Nelson comes an inspiring biography of the young person behind the world-renowned athlete. Thorpe's story of determination and perseverance will resonate with every child who dreams of finding his or her own bright path.

Joseph Bruchac is among the most respected and widely published Native American authors, with over 100 titles in print, including the popular Keepers of the Earth series and Lee & Low's Killer of Enemies trilogy, which received a starred review from Kirkus Reviews. A Rockefeller Fellow and an NEA Poetry Writing Fellow, Bruchac has received numerous recognitions over his long-standing career; including the Native Writers' Circle of the Americas Lifetime Achievement Award. In addition to writing, Bruchac is an editor at Greenfield Review Press, a literary publishing house he co-founded with his wife. He lives in Greenfield Center, New York. To find out more about Joseph Bruchac, visit josephbruchac.com. S.D. Nelson collaborated with Joseph Bruchac as illustrator of Crazy Horse's Vision and Jim Thorpe's Bright Path. He is also the author and illustrator of many picture book stories inspired by the traditions of his Lakota heritage--including Gift Horse, winner of the Parents' Choice Award, and The Star People, an Oppenheim Gold Award winner. A former middle school art teacher, Nelson is now a full-time artist whose artwork appears on book jackets, greeting cards, and CD covers, and whose paintings are held in both private and public collections. He is of Lakota (Sioux) descent and lives with his wife in Chandler, Arizona. Visit him online at sdnelson.net.