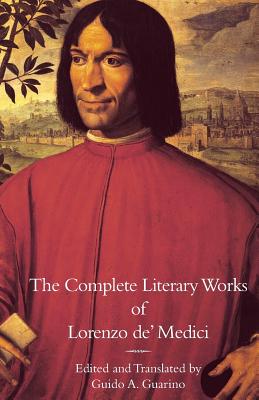 Lorenzo de' Medici (January 1, 1449-April 9, 1492), known as Lorenzo the Magnificent, was the scion of the powerful and wealthy Medici family. A diplomat, politician, patron and friend of artists and humanists, he was also ruler of the Florentine Republic from December 2, 1469 until his death. Although he died at the age of forty-three and ruled for only twenty-three years, he was well recognized for his importance to the Florentine High Renaissance, and his death coincided with the end of its Golden Age and with the onset of renewed strife among the Italian city-states. Lorenzo was also an author and particularly a poet. He wrote in a variety of forms, from sonnets to short stories and from eclogues to ballads. His material included love poems, comic works and devotional and philosophical discourses. His reputation as a writer has been the subject of substantial critical work, especially in the late nineteenth and early twentieth centuries. In this volume, Guido A. Guarino presents, for the first time, the entire corpus of Lorenzo's literary achievement in English translation. This edition provides a fresh opportunity for a thorough re-evaluation of Lorenzo's endeavors in the light of contemporary scholarship and new critical methodologies. 542 pages Introduction, bibliography, notes, index. First modern English translation.